Myra Melford Trio: Alive In The House Of Saints Part 1 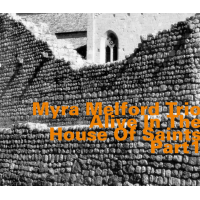 Back in 1993, pianist Myra Melford announced herself on the international stage with Alive In The House Of Saints and it still constitutes exhilarating listening. It was the third and, as it happened, last album by her trio completed by bassist Lindsey Horner and drummer Reggie Nicholson, following a brace of recordings on the Enemy imprint (although she did supplement the line up with trumpeter Dave Douglas and reedman Marty Ehrlich for Even The Sounds Shine (Hatology, 1995). Originally issued as a single CD, further live material was added for release as a double disc set in 2001, but Hatology is now making the date available again in two parts.

While the trio recognizably inhabits the tradition, Melford extends and subverts the genre through her adventurous compositions in a foretaste of what was to come with her bands such as Same River Twice, Be Bread and Snowy Egret. She also distinguishes herself through a notable rhythmic impulse, blues-tinged extemporizations and the capacity to take matters outside. Horner provides a solid foundation, holding down vamps in a way that they don't overstay their welcome, and proposing a pulse-based lyricism when in the spotlight. Nicholson not only propels but also plays the tunes, recalling Ed Blackwell as he extrapolates upon them during his features.

Each track defeats expectations. The dashing "Evening Might Still" offers a lively starter, hewing closest to what might be anticipated from the instrumentation. But as the piece opens out Melford creates tension with a repeated barely changing figure, only to resolve it with rolling aching outbursts that bring a nod of recognition. Nicholson introduces the scuttling theme of "Now & Now 1" with a gentle tattoo, before the pianist ends a flowing solo by fragmenting her lines into jabbing chords and flailing runs over a freer impetus.

The drummer enjoys a distinctive break on the first stalking, then exultant "Between Now & Then," animating a press roll from near inaudibility to a lurching gait which presages jazzy stretches, tango-like inflections and more offgrid mayhem. But it's the closing "Parts I & II Frank Lloyd Wright Goes West To Rest" which pushes the envelope most. It begins with a spasmodic stagger before unfolding into bustling ensemble interplay, modulated by bursts of concentrated furor.

Melford shines on a passage of cleanly articulated hyper speed stabbing which evokes her mentor Don Pullen at his most boisterous. Further developments lead into a more understated second section which investigates timbre and tone color, and confirms just how well-integrated this unit was across the whole spectrum.