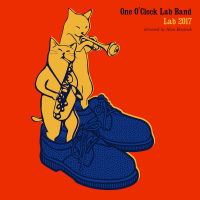 To mark the seventieth anniversary of its establishment, the Division of Jazz Studies at the University of North Texas in Denton has issued superb CD compilations honoring four of its distinguished educators / bandleaders in addition to Lab 2017 by the university's flagship One O'Clock Lab Band, the fiftieth annual recording by that widely celebrated ensemble. The compilations, consisting of ten CDs in all, salute former faculty stalwarts Neil Slater, Jim Briggs and Jay Saunders along with present faculty member Rich DeRosa, an eminent composer and arranger as well as an inspiring teacher who joined the UNT jazz program in 2010.

Slater, who led the One O'Clock Band from 1981-2008 and is its longest-tenured director, is represented by a four-disc anthology that includes every composition written by him for the band plus the Grammy-nominated theme "Neil," penned by DeRosa. Disc 1 covers the 1980s, Disc 2 the 1990s, Disc 3 the 2000s, while Disc 4 is titled A New Era. Also included is "Values," Slater's commissioned work celebrating UNT's one hundredth anniversary. A 168-page book accompanies the boxed set, featuring hundreds of photos and notes by band members, colleagues and friends.

UNT's splendid Two O'Clock Lab Band is commended on the three-disc assortment Airstream Artistry: Jim Riggs' Best of the Two and the double-disc set Nice! Jay Saunders' Best of the Two. The freewheeling Airstream Artistry includes forty selections from ten CDs recorded by the Two O'Clock Band under the direction of Riggs who taught saxophone at UNT for thirty-five years. Under his leadership, the Two O'Clock Band earned DownBeat magazine Student Music Awards for best large ensemble in 1994, '97, 2001, '06 and '08. Nice! amasses on two discs eighteen admirable tracks recorded by the Two O'Clock Band under Saunders' direction from 2008-14. Saunders, a veteran of the Stan Kenton Orchestra, taught lead trumpet and jazz history at UNT from 2000-2016, and also directed at times the One O'Clock and Three O'Clock Lab Bands.

DeRosa's single CD, Perseverance: The Music of Rich DeRosa at North Texas, is a compilation of eight of his themes and arrangements that were recorded by the One O'Clock and Three O'Clock Lab Bands and UNT Concert Orchestra from 2011-16. It includes the composition "Neil" and "Suite for an Anniversary," a commissioned work celebrating the university's one hundred twenty-fifth birthday.

Lab 2017, which continues a half-century tradition of excellence, is the One O'Clock Band's first recording under its new director, Alan Baylock, a UNT alumnus and former chief arranger for the U.S. Air Force's premier jazz ensemble, The Airmen of Note, in the nation's capital. Its centerpiece is tenor saxophonist Brian Stark's three-movement suite, "Myself When I am Mingus," a colorful pastiche comprised of the tangy Schouflee Andantarino, dreamy Ellington-esque Adagio (showcasing alto saxophonist Kyle Bellaire) and aptly named Vals Presto (fast waltz, on which alto Howi Dietz displays his remarkable acuity and finesse). Fellow tenor Brandon Moore wrote the cool, unhurried "Relaxin' in Monterey" (enhanced by Jack Roben's mellow guitar and Brendon Wilkins' seductive flute) and arranged the Harold Arlen / Johnny Mercer classic, "My Shining Hour," which opens the session, as well as Duke Ellington's "I'm Beginning to See the Light" (a tour de force for organist Henry Dickhoff).

Considering this is Baylock's first dive off the board and into the pool, he makes quite an impressive splash, as Lab 2017 easily maintains the high standards set by its predecessors, and with the ceremonial albums surveyed above helps make this a bumper year for UNT Jazz.