Home » Jazz Articles » Binker and Moses: Alive In The East? 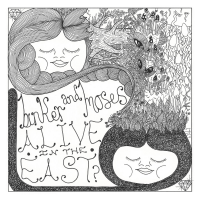 Something wonderful is happening in London in summer 2018. A disruptive musical movement, led by an inter-connected community of young musicians, is taking jazz in vibrant new directions and finding enthusiastic new audiences. Hybridisation is the name of game, which reflects London's cultural diversity by absorbing locally created styles such as grime and broken beat within the music's traditions. Many of the new movement's auteurs and at least half of the players are black. Nothing like this has happened in Britain before. Not on this scale anyway. The scene embraces nu-fusion, Afrobeat-inspired dance-centric bands, shamanic spiritual-jazz and free jazz. Binker and Moses, led by tenor saxophonist Binker Golding and drummer Moses Boyd, can best be described as playing semi-free spiritual jazz. Alive In The East? is the group's third album, following Dem Ones (Gearbox, 2015) and Journey To The Mountain Of Forever (Gearbox, 2017). Like its predecessors, it was recorded live, with no edits or drop ins. As on Journey, the group includes saxophonist Evan Parker and trumpeter Byron Wallen, representing older generations of London experimentalists, and harpist Tori Handsley and drummer Yussef Dayes, contemporaries of Golding and Boyd. Handsley is the least well known member of the lineup. She is remarkable. Her approach here has little connection with Alice Coltrane or Alina Bzhezhinska, eschewing glissandi and approaching the harp instead like a twangtastic, acoustic bass guitar. The music's default position is ferocity. But discordancy is not a feature—the emphasis is on solo rather than collective improvisation, so avoiding the cacophony that is a characteristic of much full-on free jazz. Jumping-off points are provided as much by Boyd's beats as Goldings's harmolodic centres. Motor rhythms are ever present, not so much grooves as urgent pulses, pushing the music forward. The result is a whirlwind. It can rip the hair clean off the back of your neck. It is impossible to pin a precise start date on London's emergence as a new global centre of jazz innovation. Movements such as this start with hints and ellipses before morphing incrementally into reality. An early marker was undoubtedly Sons of Kemet's debut, Burn (Naim), in 2013. But that album had a significant precursor in its producer and drummer, Sebastian Rochford's band Polar Bear, which debuted on disc ten years earlier. Certainly, an identifiable movement had coalesced by 2014, the year Golding and Boyd first recorded together in singer Zara McFarlane's band. Significant recordings since then include Shabaka Hutchings's Wisdom Of Elders (Brownswood, 2016), recorded in South Africa with South African musicians but focused on Hutchings's spiritual-jazz aesthetic; keyboard and drums duo Yussef Kamaal's Black Focus (Brownswood, 2016); trumpeter Yazz Ahmed's La Saboteuse (Naim, 2017); Zara McFarlane's Arise (Brownswood, 2017); Sons of Kemet's Your Queen Is A Reptile (Impulse!, 2018); the various-artists project We Out Here (Brownswood, 2018), featuring Maisha, Ezra Collective, Triforce, Kokoroko and line-ups led by Hutchings, Boyd, tuba player Theon Cross and saxophonist Nubya Garcia; keyboardist Kamaal Williams's The Return (Black Focus, 2018); flautist Tenderlonious's The Shakedown (22a, 2018); and keyboardist Joe Armon-Jones's Starting Today (Brownswood, 2018). All these albums have been reviewed here. 2018 is an exciting time to be a jazz fan in London. It must have been fun like this to be on 52nd Street in the mid 1940s. But no greater fun, surely.

The Birth Of Light; How Land Learnt To Be Still; The River’s Tale; How Fire Was Made; How Air Learnt To Move; Children of the Ultra Blacks; Mishkaku’s Tale; The Discovery Of Human Flesh; Beyond The Edge; The Death Of Light.