By Chris May
May 27, 2021
Sign in to view read count
The Swiss-based ezz-thetics label was launched in 2019 by Hat Hut Records' founder, Werner X. Uehlinger, and its Revisited strand is a jazz aficionado's dream. The series is devoted to landmark avant-garde recordings from the 1960s, and ezz-thetics does more than simply reissue them. Peter Pfister, Uehlinger's longtime mastering Jedi, improves the audio quality of the discs so substantially that listening to them is, at times, almost like hearing the music anew. Among the albums in the Revisited catalogue are ones by Sun Ra Arkestra, pianist Paul Bley and saxophonists John Coltrane and Marion Brown. Here are two more treasures. One is by tenor saxophonist Albert Ayler and his paradigm-shifting trio with bassist Gary Peacock and drummer Sunny Murray. The second is by New York Contemporary Five, a short-lived all-stars-in-the-making lineup which included tenor saxophonist Archie Shepp, pocket cornetist Don Cherry and alto saxophonist John Tchicai. Both albums are important chapters in the story of the New Thing school which emerged in African American jazz in the early 1960s. 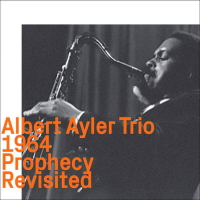 In his engaging Coltrane: The Story Of A Sound (Faber and Faber, 2007), author Ben Ratliff quotes something the Boston-born poet Robert Lowell said during an interview with the British literary critic Al Alvarez circa 1964, the year 1964 Prophecy Revisited was recorded. "What one finds wrong with American culture is the monotony of the sublime," said Lowell. "I feel maybe what is extreme and perhaps unique about America is that for the artist his existence becomes his art; he's reborn into it and he hardly exists without it... Art is always done with both your hands in America. The artist finds new life in it and almost sheds his other life."

Ratliff cites Lowell's words during a passage about the so-called "sheets of sound" on John Coltrane's Giant Steps (Atlantic, 1960) and the sustained intensity of emotion Coltrane expressed on Live At The Village Vanguard (Impulse, 1962). But the idea of "the monotony of the sublime" is appropriate to discussions about Albert Ayler, too. Ayler's raptures were seamless—and, to those with ears to hear them, are altogether glorious.

In a 2021 interview with All About Jazz, the British tenor saxophonist and clarinetist Shabaka Hutchings dropped another pertinent insight. Hutchings said that the first time he listened to the pianist Cecil Taylor's Silent Tongues (Freedom, 1975) he could not understand it. "In general in jazz you know that there is going to be some kind of climax point, some kind of tension and release," said Hutchings. "Whereas this album, it was all tension, or all release, so it was kind of disorientating. I would close my eyes and listen and I wouldn't know whether I was at the beginning, the end or the middle of the music, just that I was in a timespace close to infinity."

Much the same might be said of an Ayler album. After each theme statement, the music kicks into warp drive and stays there, inhabiting a temporal flatline. As Hutchings became aware, a requirement for making sense of Taylor's music is not to try to understand it but to surrender to it on an emotional level. The same applies when approaching Ayler.

1964 Prophecy Revisited finds Ayler with both feet (and Lowell's hands) over the threshold of his belle epoque. It was recorded live at New York's Cellar Café, a 65-seat room off Broadway on West 96th Street, on June 14 1964. Less than a month later, the same trio recorded Ayler's landmark studio album Spiritual Unity (ESP, 1965). The Cellar Café performance, which remained unreleased for many years, has the same seraphic beauty. Around half the material was released as Prophecy (ESP) in 1975 and the entire performance was included on Albert Smiles With Sunny (inRespect) in 1996. The gig was recorded by Paul Haines, who is best known for writing the libretto for Carla Bley's Escalator Over The Hill (JCOA, 1971). As a librettist, Haines is borderline impenetrable but, on the evidence of 1964 Prophecy Revisited, which includes pretty much the entire June 14 performance, he knew his way around microphone set-ups. The source sound is strong and, enhanced by ezz-thetics' remastering, the music sings out like never before. 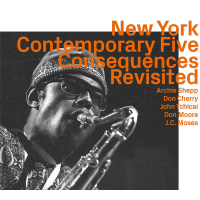 New York Contemporary Five grew out of a band Archie Shepp formed in 1962 with the trumpeter Bill Dixon and which sometimes included John Tchicai. In early 1963, embrochure problems caused Dixon temporarily to lay out, prompting Shepp and Tchicai to form New York Contemporary Five, with bassist Don Moore and drummer J.C. Moses from the Dixon-Shepp group and with Don Cherry replacing Dixon. After a few weeks of rehearsals, NYC5 gave its first public performance on August 17, and went into the studio to record Consequences (Fontana, 1966) six days later. An additional three tracks on Consequences Revisited were recorded in March 1964, with Ronnie Boykins on bass and Sunny Murray on drums, and were originally released as the B-side of Bill Dixon 7-Tette (Savoy, 1964). NYC5 then disbanded.

Although Shepp was the de facto leader of NYC5, the band was non-hierarchical and operated along collective lines. The principle of collective effort, of solidarity rather than competition—both within a band and between bands—was a feature of the New Thing. Idris Ackamoor, leader of the Cecil Taylor-mentored band The Pyramids, spoke about the idea of co-operation rather than competition in a 2020 interview with All About Jazz. "[Previous generations of jazz musicians] were raised to be crabs in a bucket," said Ackamoor. "From the 1920s onwards, they were brought up on the idea of the cutting school, where you'd try and best each other in head-to-head jam sessions. 'I'm badder than this cat, I'm badder than that cat.' But my generation felt that the priority had to be unification. Competitive cutting was opposed to unity. It was opposed to 'each one teach one' as the saying went. There was a race war going on in the US. We needed to present a united front."

NYC5 progenitor Bill Dixon was active in the cooperative movment. In October 1964, Dixon organized a week of concerts by emerging avant-garde musicians at the Cellar Café under the banner October Revolution In Jazz (an allusion to the Bolshevik revolution in Russia in October 1917). Shepp and Tchicai took part, and Albert Ayler would almost certainly have done so had he not been on tour in Europe at the time. Dixon was also behind the Jazz Composers Guild, a self-help cooperative which grew out of the October Revolution events.

The NYC5's book reflected the band's collective complexion. It was composed in roughly equal parts by Shepp, Cherry and Tchicai. Consequences also included Bill Dixon's "Trio" and a brief but gorgeous arrangement he made of Thelonious Monk's "Crepuscule With Nellie." Among the Shepp pieces is "Rufus (Swung, His Face At Last To The Wind, Then His Neck Snapped)," which Shepp and Tchicai returned to on Shepp's Four For Trane (Impulse, 1965).

Cherry was the only high-profile musician in NYC5 when Consequences was recorded, thanks to his work with Ornette Coleman. But Shepp and Tchicai are on track for stardom and on fire. So are the two bass and drums teams. Professionally recorded, Consequences Revisited has excellent audio and like Ayler's 1964 Prophecy Revisited benefits hugely from ezz-thetics' remastering.

Postscript: It is interesting to compare Shepp's assured performances on Consequences Revisited with his relatively cautious playing on the four full-length takes of "Acknowledgement" recorded by John Coltrane's augmented classic quartet over a year later, on December 10 1964, the day after A Love Supreme (Impulse, 1965) itself was made. These were finally released in 2015 on A Love Supreme: The Complete Masters (Impulse). Shepp has said that he was so on edge while recording with Coltrane that he was unable to let go and be in the moment. (He would show no such nervousness on Coltrane's Ascension, recorded for Impulse in June 1965).