BY LUDOVICO GRANVASSU | Mondo Jazz
April 20, 2020
Sign in to view read count
Click the play button to listen to this episode.
The immuno-booster series goes on... Here's another eclectic mixtape bringing you uplifting and soothing music recommended by jazz musicians.

Happy listening! Stay safe and sane with the help of great music!

For details on the tunes see the playlist below. If you're curious about the rationale behind these choices, here is what the selectors had to say [comments listed in chronological order, by reference to the songs they refer to].

I loved The Big Soul Band by Johnny Griffin back in high school and transcribed some of the arrangements from it. It's a great gospel-influenced album with Johnny Griffin flexing his blues-and-church chops after he figured out he couldn't out-sheets-of-sound 'Trane and changed his style a bit. The whole album is killer, but "Jubilation" is one of the more "uplifting" cuts. Dig Victor Sproles with some great bass playing and Clark Terry's failure to hide in a horn section!

I love playing Yusef Lateef's "Like It Is" no matter what the situation is. It's so warm and soulful. The title is also quite suiting in these strange times...

"Can We Pretend" by Bill Withers is my pick! The simplicity of the song is the reason it's so beautiful! The voice, the guitar... I can listen to it on repeat all day long!

I propose Paul Simon's "Graceland" because this song is full of energy and reminds me of optimistic times.

Today, when I received the request to propose a song for this mixtape, I was in the middle of re-listening to an album that I love, Chet Baker Sings and Play, with Bud Shank Russ Freeman and Strings. In particular, I was listening to "Long Ago and Far Away," a tune that I've always found especially beautiful in this rendition because of the gorgeous solo by Chet Baker, a solo that is crisp, beautifully constructed, completely logical, and incredibly melodious. The album was recorded in 1955, during what I believe was Chet Baker's golden phase (between 1952 and 1955), while he was in top shape, sang with this unique naughty adolescent voice, and had a complete command over his trumpet. If I had received the request yesterday I might have suggested something by Dizzy, but that was yesterday!

When I listen to songs played by Madeleine Peyroux and her band I start immediately to cry and laugh at the same time. They sooth me and uplift me energetically at the same time, like all good music. It is seriously phrased, deep music presented light and with humor and a shot of melancholia based in life experience. I'am alright then.

Bill Evans' Waltz for Debby is a masterpiece in its entirety. However the opening notes of Evans' piano and Scott LaFaro's bass on "Some Other Time" suffice to uplift my spirit and take me to a whole other world.

I chose "Aria da Capo" from Bach's "Goldberg Variations," as performed by Glenn Gould on the album Original CBC Broadcasts piece because it always brings me back to the things that are most important to me. It reminds me to go back to basics, to breathe, to be kind, to be patient, to look at things from all the sides, to go back to my roots—the things I know—and to be open to what I don't know. It feels like pure love to me and brings me great peace.

We have listened devotedly to Charlie Mariano's Adagio every year since it appeared. Charlie Mariano was a singer at the level of Marvin Gaye, Frank Sinatra or Luciano Pavarotti. The arrangements, by Mike Herting, are beautifully crafted reductions for synthesizer and guitar of the original songs, all drawn from the "classical" canon. The opening track of the album, Tommaso Albinoni's "Adagio" never fails to banish melancholy.

My choice is John Coltrane's version of "Say It (Over and Over Again)," from his Ballads album. The tenderness that he is able to express with such simple sincerity and lack of pretense always makes me feel a little better about the world we live in, and the love people can have for each other.

David Sylvian's "Small Metal Gods" is an amazing blend of improvised music, small sounds, noises and field recordings wrapped around a Sylvian-signature melody. It's rarified music, yet its intention is so dense. Sit down and crank up the volume to appreciate all its subtleties.

Even though I wrote "Song Without Words," I could have never imagined how tender and moving Amir ElSaffar's singing on it could be. It almost doesn't feel like mine but more like his tune and listening to it always makes me feel better. 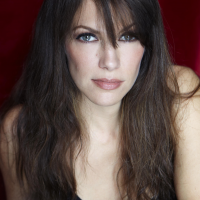