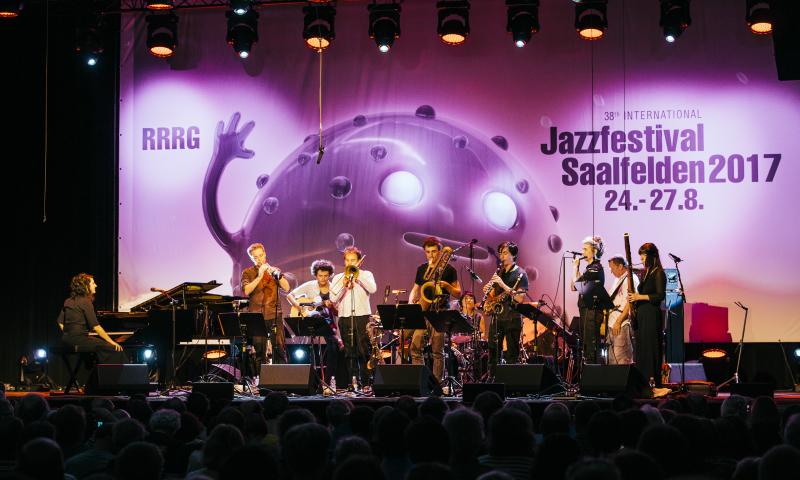 Once again, set against the amazing backdrop of the Austrian Alps, the International Jazzfestival of Saalfelden offered a unique perspective on the most adventurous jazz from around the world, as it does since its inception in the 1970s.

It is no coincidence that its rich programme (37 performances in 4 days), as well as the local warm hospitality, keep attracting promoters, critics and a very diverse audience that come from all over Europe.

The 2017 edition confirmed the increasing relevance of European artists (as I tried to sketch in a recent article) even at a festival which has traditionally focused on African-American avant heroes.

Austrian musicians were very well represented, with interesting young artists alongside well-established names like Wolfgang Puschnig or Michael Riessler. Ranging from the fresh sounding clarinet quartet Woody Black 4 to the multiple influences of pianist David Helbock Quartett, from the virtuoso solo performance of double bassist Manu Mayr to the cinematic-pop atmospheres of 5K HD, the Austrian artists revealed a renewed verve and the aim of reaching new audiences, often mixing genres and approaches.

Experiencing a festival like Saalfelden's strengthened my opinion that "jazz" is whatever a community of listeners recognizes as such, rather than a set of pre-esetablished esthetical criteria. Every year this Festival's community becomes more close-knit and open to different languages. This year the quasi-mathematical frenzy of the Japanese duo Sax Ruins, with Ono Ryoko on sax doubling the hysterically-virtuosic drum lines by Yoshida Tatsuya, or the psych-noise attacks by the Norwegian quartet Møster!, seamlessly fit a programme which also featured the swinging piano trio music composed by John Zorn and gorgeously played by Brian Marsella (with Trevor Dunn and Kenny Wollesen), the sweet minimalist wizardry of the outstanding Australian trio The Necks (one of the highlights of the Festival) and the piercing alto sax solo performance of Briggan Krauss.

True, the set played by Møster would not have been out of place at a punk venue, and The Necks deserve to be featured in the most renowned contemporary music festivals, but the very progressive audience of Saalfelden chooses to come to this festival in order to enjoy the connections and surprises that can only come from a programme that juxtaposes, often back to back, examples of very different musical grammars and styles.

Probably only a few among the hundreds of people in the Congress Hall could really understand the words rapped by HPrizm and Gaston Bandimic, the American and Senegalese rappers featured in Steve Lehman's Sélébéyone, but everyone surely got the strong textural impact of their voices into Lehman's precise conception. Impressive.

The Scandinavian "wave" hit Saalfelden with the brilliant, Ornette-derived, energy of the Cortex Quartet, the ambient mood of Sinnika Langeland's "Magical Forest," the roaring Mats Gustafsson's NU Ensemble and the twisted funkiness of Martin Kuchen Angles 9, in addition to the already mentioned Møster!. Good vibes came from the Amok Amor quartet (Germany) and Trio DaDaDa (France/Italy) as well.

But the two most remarkable concerts of this edition were, in my opinion, those by "Miller's Tale" and Eve Risser's White Desert Orchestra.

"Miller's Tale" is a quartet featuring Sylvie Courvoisier on piano, Mark Feldman on violin, Evan Parker on soprano sax and Ikue Mori on electronics. Their improvised music could shift from subtle, dusty, atmospheric, chamber-like passages to furious chases. It was improvised music at its best. The members of this band are among the greatest living improvisors, but with super-groups of this sort one can never be certain about the outcome: it can sound heavenly or boring as hell... "Miller's Tale" in Saalfelden was unique and magical, a dreamy flow of energy and ideas that truly moved the audience. You could have heard a pin drop, before the thunderous clapping and a generous encore that followed the hour-long concert.