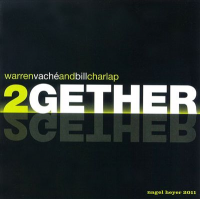 There have been many memorable duet jazz recordings. Some that I would recommend to the listener are:

And that is just a few.

The promotional material for Warren Vaché and Bill Charlap's 2gether claims that ..."this CD is different. A duo recording. Very intimate. Very beautiful." As much as this writer would like to dismiss this as advertising hyperbole on the part of Nagel Heyer, it is one of the finest discs to have crossed beneath my laser in a long time. Most certainly, this disc will be in my top ten at the end of 2001, when I am called upon to vote for the best releases of the last year.

There. The cat is out of the bag. So what is the big fuss anyway. Well, for one, Bill Charlap emerges from his first Blue Note Release to join traditional quarterback Warren Vaché for a little trip down the middle of the American Tin Pan Alley canon. I am not sure who is the most impressive. Charlap is competent in all styles of jazz. He displays the competence copiously while conversing with the conservative Vaché, who has a well-established history of performing traditional jazz with grace an panache. The disc is summed up on the closing "St. Louis Blues," where Vaché honors Satchmo and Charlap honors Fatha. The two musicians engage in a mutual admiration dance that never disintegrates into sentimentality. This is strictly music for its own sake. All pieces are carefully chosen and played. Each musician has solo space: Bill Charlap on his "Nip-hoc Waltz" and Vaché on Charlap's "Etude #2." Both players prove they can excel in small confines, no easy feat.

If I Should Lose You; You And The Night And The Music; Darn That Dream; What'll I Do; Easy Living; Nip-Hoc Waltz, Etude #2; Soon, Dancing On The Ceiling; Prelude To A Kiss; St. Louis Blues. (Total Time: 52:34