By Derek Taylor
September 30, 2001
Sign in to view read count 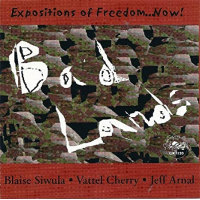 Under the unifying sobriquet of Expositions of Freedom...Now! the trio of Blaise Siwula, Vattel Cherry and Jeff Arnal is an aggregate that seizes the process of spontaneous composition as its central fuel source. Siwula and Cherry's association hearkens back half a decade to where the two met in a Cecil Taylor large ensemble. The saxophonist has since lent his skills to an album under Cherry's name For Those Who Heal. Arnal is a recent addition to the fold, but his flurried storms behind the kit suggest a solid understanding of his partner's shared improvisatory manifesto.

Siwula has many attributes of an energy player and he regularly generates a sirocco of split and striated tones that desiccate while they simultaneously intoxicate. Where he differs is in the deep range of tonal effects he is able to eke from his reed. Rather than couch his creations in torrents of overblown volume, he's flexible and clever enough to temper his sounds with a broad array of coloristic devices, even playing lyrically when the mood strikes him as on "Vibes." His partners in the cause disport a similar breadth rarely opting for easy bombast and instead lending a sensitive ear to their erstwhile leader's maneuverings.

The program alternates solo improvisations by Siwula, with lengthier trio tracks taken from a gig at the Knitting Factory main space. The juxtaposition of lone voice and trio effectively breaks up the program while allowing for a clear aperture into how Siwula responds in each situation. Alone he seems preoccupied with exploiting the various sound properties of his horn, while his group play usually utilizes increased linear phrasing, albeit still infused with a variety of pitch alterations including the heavy use of vibrato. Hollow reeds pops that sound like shots of air blown through a bamboo tube open the disc on "Pica Cato." Cherry flaunts bow on "Freedom of Thought" spreading a deep mahogany stain of arco pigments in tandem with Arnal's scrubbed cymbals. Equally effective wielding his resined wand on "Freedom in Wind" and "Freedom at Sunset" Cherry shows conclusively that his facility in this area is grossly underestimated.

Arnal has the initial minutes of "Freedom in Wind" to himself and uses the time to erect a tumbling improvisation on brushes. Siwula and Cherry eventually arrive, the former scattering livid squeals while the latterr carves out corpulent clusters that float around the bottom fringes of the sound floor. The drummer also makes judicious use of other percussion devices including what sounds like a marimba on "Freedom of Hope." In sum these improvisations deliver a form of free jazz in line with the best possible connotation of that hackneyed, but indispensable term.