BY MIKE JURKOVIC
October 12, 2021
Sign in to view read count 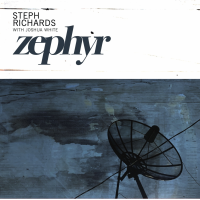 Zephyr comes at you from all sides. Some you hear coming, others you don't. And some you just hear, stop and marvel at how we choose to communicate both to ourselves and to others. You listen in and then move on to the next unknown emergency, to the next crash course, the next languid sea. It comes in fanfare and whisper ,as trumpeter & explorer Stephanie Richards—six months pregnant and blowing through resonating water vessels—and equally fearless compatriot Joshua White—as actively muscular on prepared piano as he is on percussion—translate, interpret, and tell the tale at the end of another roiling day.

Never shying from challenge, Richards and White combine for some coercive flights of fancy on each of Zephyr's twelve impulsive novellas, each its own burst of recognition and decoy. Heralding the coming of new life, the head track jumps from Richards' opening uplift only to mutate, through sombre timbral cycles, into a state of constant alertness before ending on a frenzied, pounding, anxious thunder.

As any mother-to-be or informed citizen should know, there are forces at work both inside ourselves and outside our lives that can make or break the strongest among us. Warbling and watery, "Anza" confirms those suspicions. White seems to be feeling the keys for a lullaby as Richards communes in utero with her new life within. "Nixie" is forcefully original music, as White hurls clusters and clusters of chords at Richards who deftly (defensively?) darts and dangles targets. "Sacred Sea" is the respite, though it is still only five quiet moments under a severely broken sky.

Like Cecil Taylor, Matthew Shipp, or the more contemporaneous spirit of Kris Davis, White breaks the trance, breaks into Richards' almost jubilant telling of "Cicada" with a voice that contradicts yet supports his partner's argument. At times sawing, breathing, snarling, chasing, the closing four-part "Aurora" suite (for lack of a better, more conclusive term) ups the manic, yet strangely mediative intensity. Accompanied by a slow cinema short film directed by Vipal Mongay, Zephyr is not, please take note, for the feint or faint of heart.