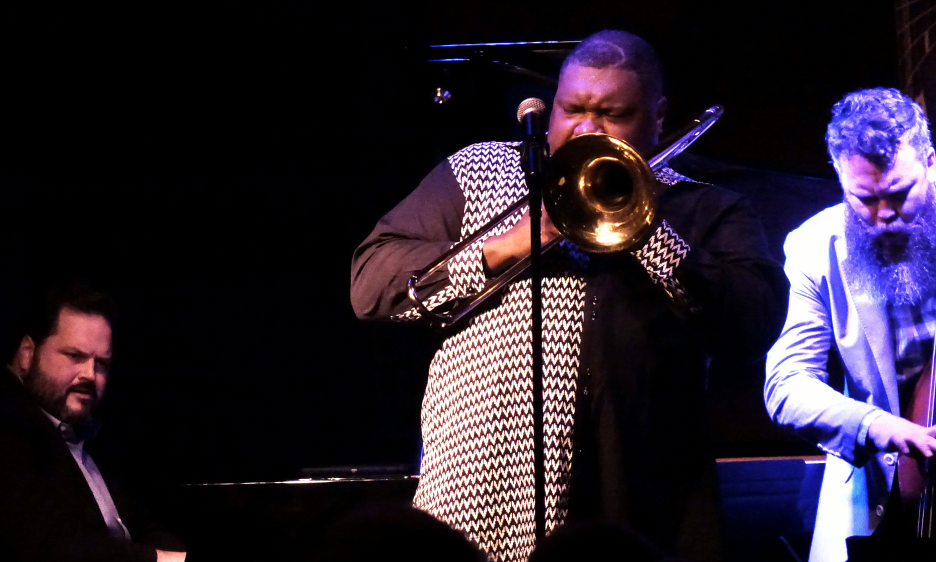 Wycliffe "Pinecone" Gordon is an Armstrong-styled horn player and has won a Louie award to prove it. He displayed that same laid-back behind the beat timing as Louis Armstrong, which belied the clarity of phrasing and true importance weighted on every single note. He began on Yamaha tenor trombone with Duke Ellington's "It Don't mean a thing (If It ain't got that Swing)." Liberal use of the plunger mute made Wah-wah sounds, as Gordon went sliding and extruding the lower notes. Gordon sings too, with precisely that same recognizably Armstrong timing and phrasing. He had something to say and play, once said, he returned to the rhythm, but he was always lagging to create expectancy.

They moved on to John Coltrane's "Impressions" played at a good clip with powerful definition. Gordon called "Sunnyside of the Street," describing it as "one of the good ol' good ones." Scott Giddens played the intro on the piano. In reply, Gordon made the trombone growl and strangled a voice out of the sound as he went up into the high notes. For his solo, Billy Thornton bowed an entire bass section delicately, and Quentin E. Baxter kept the whole moving along on drums.

Fats Waller wrote "Black and Blue" as a torch song, expressing the bitterness of a lady passed over in favor of a white girl. The song was introduced in the 1929 Broadway show Hot Chocolates along with other Waller stalwarts "Ain't Misbehavin'" and "Honeysuckle Rose." The jilted lady sang, "My only sin is in my skin/ What did I do to be so black and blue?" At a later time, the tune reappeared as a protest song, forgetting the unrequited love it first intended to address. The song was used to express human sameness and sadness with undeniable pathos, "I'm white inside, but that don't help my case/'cause I can't hide what's on my face." Giddens trilled the high notes then rolled into full, lush delivery of the melody, while Gordon sang and hit some exquisite phrases on trumpet. He took the mouthpiece from the trumpet (which he had himself developed in his pro signature range) and played it separately, vamping the sound with his hand. In "Stars fell on Alabama" (written to mark a real meteor shower), Gordon squeezed more notes without splitting them, searching out a vox humana sound in the style of early horn players unrestrained by formal training who sought to add emotion to their music by extracting the sounds of human despair and expression. Professor Gordon left the stage to the trio who featured Giddens on piano. Time spent in practice rooms together with Billy Thornton on bass at the North Florida Jazz program showed through in their tight, concentrated effort while Baxter displayed his rhythmic brilliance with ease.

They closed with a New Orleans classic, "Just a closer walk with Thee." The big-four beat marched them mournfully along as Gordon again returned to his search for voices on a rarely heard valveless soprano slide trumpet which he is keen to develop. They went upbeat into the 1964 soul classic "Mercy, mercy" with its impassioned plea. "Have mercy on me."

Gordon has total mastery of the trombone and trumpet. He has gone back to the roots of excellence laid down by Louis Armstrong. This was not a tribute performance. It was a display of a level of excellence which few have achieved. Blowing hard, Gordon maintained complete control, switching instruments with natural ease.

Quentin Baxter on drums and Billy Thornton on bass stayed over and were joined by Kevin Bales from Atlanta on piano. The trombonist was Vincent Gardner. It would be wrong to make comparisons between two trombonists simply because they play the same instrument. The two sounds ran parallel, but the style, setlists and attack were worlds apart. Gardner is a top-flight jazz orchestra musician, playing first chair with the Jazz at the Lincoln Center Orchestra.

Gardner began his second set with a composition by British pianist Victor Feldman for Miles Davis titled "Seven steps to Heaven" The solos ran long and deep with a particularly hot piano from Kevin Bales and a sharp finish. Next, the group turned to a Charlie Parker piece, "Charlie's Wig," which he recorded in New York for Dial records in 1947. "There is nothing wrong with a little bebop" as Gardner said.

Gardner has an exceptionally smooth voice, which he demonstrated in a Jon Hendricks song "Gimme that wine," where he delivered a long and complicated scat section. The title refrain received a shouted response from the other band members, "Gimme that bottle!" New Orleans drummer James Black wrote the next instrumental piece, "Dee Wee," which was recorded by jazz patriarch Ellis Marsalis. Black was little known outside of the City of New Orleans but is now recognized as one of the premier funk drummers through the 1960s. George Gershwin's "Our Love is Here to Stay" opened with a solo trombone introduction, and featured a fine vocal rendition from Gardner, as well as an excellent and thoughtful piano solo from Bales.

"You go to my head" (and you linger like a haunting refrain) from 1938 has a languid, ethereal quality utterly suited to the round trombone timbre. They played out with a blues "Centrepiece" repeating the couplet at the end of each verse "Nothing's any good without you/ ' Cause baby you're my centerpiece."

Gardner gave a smooth performance allowing plenty of space for the trio supporting him to show their solo excellence. The trombone sound was complemented by his strong vocals littered with complicated scat sections.