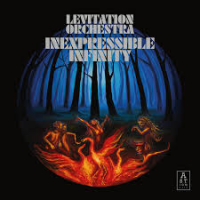 A lot of bull is talked about collective music-making, so it is good to come across a band who not only talk the talk but also walk the walk. Good, too, to come across a debut album that is as outstanding as the thirteen-piece Levitation Orchestra's Inexpressible Infinity. Vibrant, joyous and cosmopolitan, it joins Theon Cross's Fyah (Gearbox Records) and Cassie Kinoshi's SEED Ensemble's Driftglass (Jazz Re:freshed) among the best albums to come out of the London underground scene which has been revitalising British jazz throughout 2019.

Levitation Orchestra's closest brush with a leader is trumpeter Axel Kaner-Lidstrom , the best known of its players, whose initiative led to the formation of the band and who is also credited in the lineup credits with "directions in music." From there on in, the ensemble is a genuine collective. Five parts of the six-part, forty-minute suite which comprises Inexpressible Infinity were composed during group rehearsals, with all the musicians chipping in on an equal basis. The sixth part, a brief, unaccompanied, tenor saxophone solo, was spontaneously composed by James Akers.

"The music does not belong to any one member, everyone has contributed, and is included in the creation of each piece," says the liner note, which also observes that "music that is owned not by the individual but by the collective is a way of life that has been eroded over time by the cut-throat creative industries. Levitation Orchestra is stepping outside of that paradigm." As noted, Levitation Orchestra can talk the talk.

The liner note also refers to Levitation Orchestra's "unity of intention," a prerequisite for any collective music-making with ambitions to be more than a musicians-only encounter group. Broadly speaking, the musicians' sonic and philosophical roots, at least as they are expressed in Levitation Orchestra, can be traced back to Sun Ra and the spiritual jazz tradition which was launched by Alice Coltrane, John Coltrane and Pharoah Sanders in the mid 1960s and given an early platform on US labels such as Strata-East and Impulse! Records. Shots of bracing, Fender Rhodes-driven fusion keep everyone on their toes. Despite the presence of two vocalists, Inexpressible Infinity, like most albums in the spiritual-jazz tradition including Kamasi Washington's chorale-heavy epics, is what most people would understand to be instrumental; that is, the vocals are wordless and the non-linear narrative unfolds through sound and vibe, unencumbered by lyrics.

Another self-identifying collective on London's underground scene is Nerija, a great band. But in Nerija's scheme of things, being a collective mostly means that each member brings their own tune to the party: the group's 2019 debut album, Blume (Domino), contained one tune from each of the seven members and just two group compositions. Levitation Orchestra though is as near to being a 360-degrees' collective as it is practical to get.

A collective approach is not the only framework for successful music-making, and it is a hard one to execute, but when it works, as it does here, it is something special.