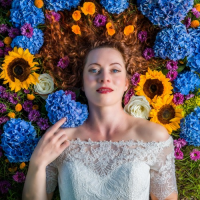 Those looking for a chanteuse in the jazz tradition often have limited options outside of legends such as Ella Fitzgerald, Billie Holiday and Sarah Vaughan or more contemporary stars like Diana Krall or Jazzmeia Horn; if they are looking for original music, more often than not they're out of luck. So, fans of the style may be interested to learn about Eva Schubert. The Vancouver-based singer-songwriter leans heavily on jazz influences while also embracing funk and soul. She also writes her own songs, citing influences such as Etta James and Leonard Cohen among others.

Schubert's latest release, Hot Damn Romance (Self Produced, 2019), is a five-track EP described as a "love letter to old school jazz." Fittingly, most of the songs swing and feature fine playing from her rhythm section and soulful solos from guitarist Michael Kavalerchik and trumpet/flugelhorn player Alexander Brown. The title track even features some scatting from Schubert herself, though a little more grit and a little less reverb may have added some character to her performance.

It is songs like "Water," though, that really shine. Here Schubert's poetic lyrics find a home in evocative accompaniment that calls to mind some of Joni Mitchell's later recordings. Her warm soulful alto is reminiscent of Sade and her artful use of straight tone and occasional vibrato showcase her vocal control. This is far from all she is capable of, though. On tunes that swing, such as "Flying High," Schubert's tone and use of vibrato could be a subtle nod to the inimitable Abbey Lincoln and, on the funky single "Brawler," she takes rhythmic and melodic liberties which show off her bluesy influences.

Schubert's smooth and sultry aesthetic will be sure to delight fans of Diana Krall or Sade, and the mix of swing and funk will go over well with fans of smooth jazz.