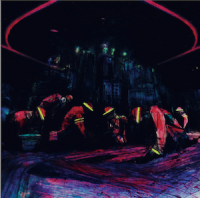 Of all the bands playing jazz-rock, or fusion, or whatever-you-want-to-call it, the Jacob Fred Jazz Odyssey (or JFJO as they're known by their fans) is the one that comes closest to embodying Joe Zawinul's dictum regarding Weather Report's modus operandi: ..."nobody solos, everybody solos." The similarities stop there, however, though JFJO's careening omnivorous creativity, like Weather Report's, has enabled the band to carve out some very distinctive sonic territory. While JFJO's omnivorous jazz aesthetic—one which embraces Earl Hines as well as Cecil Taylor—remains front and center, there are myriad other sonic reference points in evidence: James Blake, Dr. John, Flying Lotus, and any number of horror film soundtracks and so-called post-rock bands. Keyboardist Brian Haas and guitarist Chris Combs alternate thick, multi-layered slabs of electronic and acoustic sound with piquant, hummable melodies while Josh Raymer effortlessly reproduces the stuttering, ultra-funky beats one normally associates with the work of cutting-edge artists such as J Dilla.

The uniqueness of JFJO's densely layered sound may partly be due to the fact that the trio maintain strong roots in their home town, Tulsa, OK. Tulsa has an amazing musical heritage, counting the likes of Leon Russell, J.J. Cale, The Gap Band, and Jim Keltner amongst those who've sprang from its red soil. There's more than a little bit of that Tulsa grit in evidence on Worker, and it's precisely that unforced, natural combination of filthy bluesy funk with 21st Century thinking and technologies that makes JFJO's music such a worthwhile and immersive experience.

Compositional duties on Worker are split between Combs and Haas. Each has their own very strong musical identity. Haas is still working some of the steam off his wonderful album of electronica-informed duets with super-drummer Matt Chamberlain (Frames, Kinnara Records / Royal Potato Family, 2013). The self-contained spareness and razor-sharp melodicism of his duet album shows up in spades on Worker. "New Bird," stripped-down and unhurried, alternates a hopscotching keyboard melody with Combs' anthemic slide guitar. There's a counter-melody that appears, almost deceptively, before the second chorus which, itself, gets stretched out as Haas solos underneath. This might sound chaotic, but it isn't. Haas' arrangement leaves so much space that you get to hear everything that's happening in between the notes. The dub-flecked, Moog bass-fueled "Betamax" recontextualizes similar strategies; Raymer even lays off his cymbals for a chorus or two so all of Haas' and Combs' nifty background stuff shines through. "Say Nothing" vigorously juxtaposes a classically-inspired keyboard run with out-and-out rock'n'roll stomp. Haas' joyous Moog solo on the out-chorus sounds like old school prog-rock.

Combs' pieces have a similar ethic, but with a signature twist. The guitarist is fascinated with superimposed rhythms, and really puts Raymer to the test on "Appropriation Song," which frames a massive and quite unexpected rhythmic modulation. The spooky, Hallowe'en fun house adventure "Bounce" superimposes a sputtering, machine-like Moog sample with a stalking, almost-shuffle type rhythm. Haas has a blast here, playing Jerry Lee Lewis-inspired rock piano underneath it all. Macabre meets pretty on "Let Yourself Out," a slower-paced piece that dissolves into squelchy dubstep-inspired synth. The overlapping Rhodes and slide guitar melodies of "Better Living Through Competitive Spirituality" are broken up by the unexpected and unmistakable sound of a child's toy piano. Combs' solo here is brief, but totally unhinged. The album's sole collaboration, "Hey Hey NSA" is also the most sonically dense piece, combining Combs' off-kilter rhythmic proclivities with Haas' oddball harmonic sensibility.

Worker is further proof that JFJO is the sole occupant of a characteristic musical niche that exists somewhere between jazz, post-rock, electronica, funk, and some other sort of music that hasn't been named yet. The fact that they have strayed so far from their point of origin, and the fact that they completely refuse to pander to 20th Century fusion cliches may have cost JFJO a few fans along the way, but that is the price of artistic relevance. Frankly, it's hard to think of a more original, fresh-sounding band.