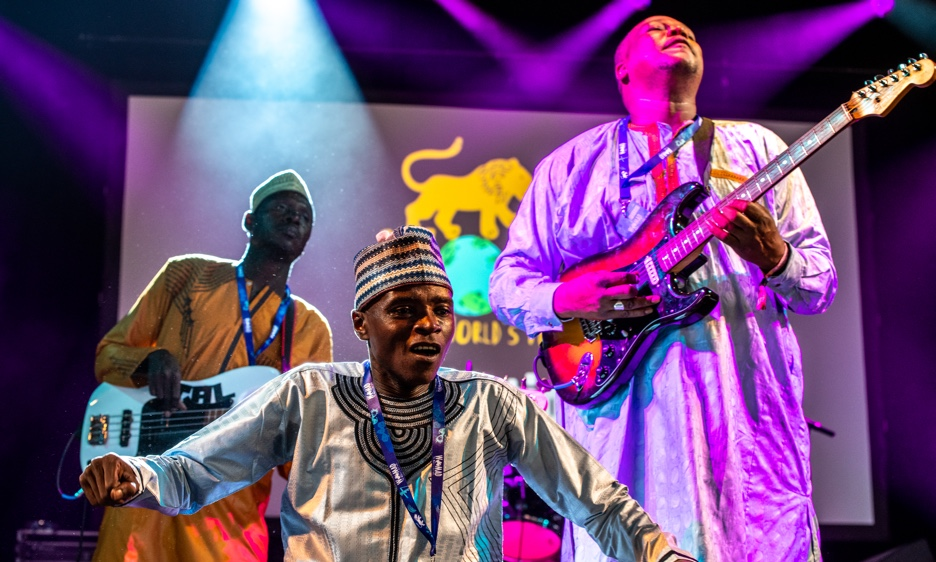 If festivals might have become bonded to female performer quotients (or not, depending on the individual festival), there is no potential negative effect when selected artists are of the high calibre presented at this year's WOMAD. Indeed, most of this long weekend's best global-feast sets were given by female bandleaders, or outfits with significant womanly presences. At least three of these could be deemed extremely quirky individuals.

There are always new discoveries to be made at this festival. The French-Colombian quintet Pixvae were one of these, and also qualified as being securely in the top five of 2018's WOMAD performances. Their essential combination involved the commingling of traditional folkloric song, and percussion, with a brutalist heavy rock dynamism. Everything melded perfectly, as the twinned vocals of Margaux Delatour and Alejandra Charry intersected across the tensed power-bleed of Romain Dugelay (baritone saxophone/electronics), Damien Cluzel (baritone guitar) and Léo Dumont (drums). Yes, this combo prefers the low-end scuzz pit. It was extremely refreshing to have some menace at WOMAD, a festival mostly renowned for its open-hearted partying stance. Fittingly, Pixvae were received enthusiastically by most of this final-afternoon crowd. Their vocals and hand-held shaker percussion sounded quite purist, in the Colombian hardcore manner, but took on an unfamiliar cast when shadowed by the waves of cyclic riff guitar distortion, the behemoth roars of the baritone, and the deep vibrations of the electronics.

Garbed in what might be termed boxing champ superheroine chic, the Turkish surf garage rock singer Gaye Su Akyol was joined by her masked male band, gold cape shimmering as she completely dominated the Big Red Tent on the Saturday afternoon. Vocally, her input resides in the Turkish folk-pop corner, but with a Goth-a-billy twang, sometimes echoed with some distinctly hillbilly guitar lines.

Heading back further to the Friday, La Dame Blanche operated a visually old school Cuban look, but vocally mixed up rap, ragga and son, sometimes during the same pushy deck-spinning number. There were also shades of conventional showbiz vocal projection, as if making a Havana-Broadway pact. Electrifying on the early evening Ecotricity stage, she was larger than mere reality, a cartoon figure of strong-will, swigging humour, but ready to switch on forcefully if she was slighted in any way. Chomping on a cheroot, making occasional solo asides on the flute, and passing spirits around the front of the dancing crowd (booze spirits as well as santeria spirits).

The Parisian singer Camille joined this year's select clan of intense choreography greats, almost matching David Byrne with her well-sculpted movements, aided by a nimble, mobile, pliable group of performers who at certain points brandished their own marching drums. Camille not so much fought against the rain, but lapped it up, succeeding in seeming totally impulsive as she roamed and romped around, draped in a simple dress, a design matched by both her female and male companions. Like David Bowie, for instance, Camille revels in making quite an accessible act out of elements that have their roots in alternative art. Even if it was an illusion, it frequently seemed like she didn't know in which direction she'd leap, or cavort, even though there was invariably a well-coordinated landing at her destination point, whether physical or musical. She actively encourages a childlike lust for an immediately gratifying exploration of the new, but she'd laid a few prior plans, doing her best to make them not appear like graven trajectories. Her staging stance and vocal layering was often similar to how we might imagine a more unruly, punkier Meredith Monk. Plus, Camille was surely the only artist at this year's festival to indulge in a bout of spanking, as she explored the tactile qualities of her percussionist companion's derrière (he was curiously garbed in a silky, hooded boxer's gown for the duration of the gig).

Renata Rosa specialises in the hardcore folkloric sound of north-eastern Brazil, singing exuberantly, and sawing fiddle in the maracatu fashion, her band featuring adept guitar, percussion and spirited call/response group vocals. The songs were open and approachable, but completely shorn of any smoothness, fully juiced, and without watery additions. Rosa was the best Brazilian artist that WOMAD has featured in recent years.

Trumpeter Yazz Ahmed was born in London, but grew up in Bahrain, her Hafla Band savouring the connections to be made between jazz and Middle Eastern music, and sent through a subtle electronics filter. Her expanded line-up included bass clarinet and vibraphone, both of these being particularly frequent solo voices, as well as Ahmed's own horn. The leader often delivered a statement, then caught it inside an effects pedal, drawing out its inner qualities, expanding tones into broader swathes. Development was often subtle and gradual, making up an involved, swaying procession of solos, swiftly changing hands and often displaying ambiguous attitudes to the spotlight, before becoming part of the gleaming whole once more.

Usually, most of the main stage headline performances provide some sort of climax, unless we want to avoid an artist that we're certain we won't enjoy, scampering off to some unfamiliar alternative. This year, though, all three of the theoretically well-chosen climaxers delivered lacklustre sets. The Thievery Corporation, Leftfield and Amadou & Mariam (these last most surprisingly) failed to excite over length. It was actually more rewarding to end up in the Big Red Tent for DJ sets by Goldie and Gilles Peterson. Is this an illusion, or has the subtle re-positioning of the main stage created a severe lack of adequate space, making it harder to gain a worthwhile vantage point, when most of the WOMAD audience converges on this zone for its final set of the night?

The most danceable band of the weekend were Tal National, from Niger, who built up a compulsive, repetitive groove during their late night Friday set on the BBC Radio 3 Charlie Gillett stage. This was with a reduced line-up, due to visa problems upon entry to the UK. They triumphed via ever-spiralling guitar solos, anyway, even under such dire circumstances. A close second in the dancing contest was Orchestre Les Mangelepa, those veteran Congolese-in- Kenya guitar-fixated revivalists, transporting us back to the heyday of soukous sounds. Conversely, the emergent combo of Kokoko!, garbed in matching workmen jumpsuits, demonstrated their homemade instruments, debuting a new sound from Kinshasa. Theirs was a different sort of repetitive pulse, derived from modern electronic dance music, but still attuned to a very rootsy, hands-on percussiveness, whether on actual drums or makeshift string constructions, with rappy chants, metal beats and weebly synth solos.

It's been a long while since WOMAD presented a Moroccan Gnaoua music master, and Maalem Hamid El Kasri delivered the classic sound, singing and playing his resonant three-stringed sintir, and joined by a row of qraqeb players (clashing metal castanets). Everyone sings in this ensemble, and several members come out to dance, twirling and crouching with great vigour and precision. Your scribe actually caught both of Kasri's sets, the best being the Saturday indoor Siam Tent show, which featured more wild dance moves and a heightened atmosphere.

Something of an odd act out were the Polish punk gang Hańba!, hailing from Kraków. Their vintage comes not from the expected 1976, but further back in the 1930s, believe it or not. Well, at least they perform in a rowdy, bawdy approximation of what a protesting street combo would have sounded like, knitting Polish folk with aggressive punk. Their name translates as 'Disgrace!,' and their weapons of dissent are accordion, banjo, tuba and drum. They stood out as being quite apart from the rest of the programme, and offered a compelling shunt into a radically different closed universe, sandwiched as they were between La Dame Blanche and Leftfield.

Let us not neglect the d&b Soundscape tent, another provider of frequently exceptional alternatives. Over the weekend, there were extremely calm, concentrated sets by laptopper Leafcutter John, using motion and light sensor tactics to add visual expression to his sonics, whilst actually forming his music through movement. Then the Irish fiddler Caoimhin O Raghallaigh played completely solo, and softly, partly folky, but also emanating into a more general sphere of ambient painting. The most enchanting performance was given by sound artist and field recordist Chris Watson, who concentrated on his Riding The Silver Tide dawn chorus repertoire, managing to almost completely silence the entire crowd, who sprawled around the tent, drifting off inside sculpted sonic records of varying birds in various weather conditions. He sometimes snapped us out of our nature reveries, filling out the background to his next recording, before we communally wafted off again, into another countryside (or urban backyard) portrait. All sounds were captured around the British Isles, that most exotic of regions.