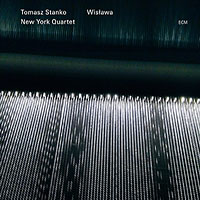 Since returning to the ECM fold in 1994 to record Matka Joanna (1995), Tomasz Stańko has virtually rebooted a career that demonstrated significant promise back in the 1970s, when he released Balladyna (1976) for the label, and worked with others including Finnish drummer Edward Vesala and American bassist Gary Peacock. The Polish trumpeter was far from dormant in the period between 1981 and 1994, releasing a slew of recordings in Poland, but none—with the exception Bluish (Power Bros, 1992) and Bosonossa (Gowi, 1993)—came close to his work for the German label. That those last two recordings were made with stalwart ECM artists—Bluish, with bassist Arild Andersen and drummer Jon Christensen, and Bosonossa with the same group that would go on to record both Matka Joanna and Leosia (ECM, 1997) (pianist Bobo Stenson, bassist Anders Jormin and drummer Tony Oxley)—may well have something to do with rekindling ECM head Manfred Eicher's interest in Stańko.

Whatever the reason, the trumpeter's career has been refreshed and renewed over the past two decades, even as he's fronted a variety of projects ranging from his tribute to fellow Pole, pianist/composer Krzysztof Komeda (1997's Litania) to grooming a young Polish trio that, beginning with 2000's darkly melancholic Soul of Things, would ultimately continue as a standalone entity on ECM (Marcin Wasilewski Trio, last heard on 2011's Faithful), even as the trumpeter formed a new group for Dark Eyes (2010), which brought together a stunning Danish/Finnish collaboration whose 2009 performance at Norway's Molde Jazz Festival was but a warm-up for the quintet's incendiary closing show at the TD Ottawa International Jazz Festival a year later.

Now splitting his time between New York City and Warsaw, Stańko may well have put together the best group of his career with his New York Quartet and its debut recording, Wislawa. Over the past decade, bassist Thomas Morgan and drummer Gerald Cleaver have shaped growing presences on the label, Morgan for his collaborations with guitarist John Abercrombie and pianist Masabumi Kikuchi, and Cleaver for his work with reed multi-instrumentalist Roscoe Mitchell, and bassist Miroslav Vitous and Michael Formanek.

Pianist David Virelles is the wildcard here, just as he is on saxophonist Chris Potter's outstanding leader debut for the label, The Sirens (2013). With Continuum (Pi, 2012), the Cuban expat was already breaking free of the shackles that confined his early work with Canadians including bassist Roberto Occhipinti and saxophonist/flautist Jane Bunnett. Not that he's deserted his Latin/Afro-Cuban roots, which Virelles combines with classical studies and a penchant for more idiosyncratic jazz pianists like Andrew Hill and Thelonious Monk, but with The Sirens and, quite possibly even more so here on Wislawa, Virelles is now able to more freely explore all points in this unique constellation and, despite still being on the shy side of thirty, has quickly proven himself worthy of mention in the same breath as Jason Moran, Craig Taborn and Brad Mehldau, three other American-based pianists who've caught Eicher's ear in a big way in recent times.

What makes Wislawa stand out amongst Stańko's consistently impressive ECM discography is that the trumpeter seems to have found a group that, from the get-go, is capable of the broader purview his recordings have always shown, but each in more specific, individualistic ways. Here, Stańko's quartet is capable of moving from effortless demonstrations of purer freedom ("Faces"), fiery swing ("Asssassins") and indigo balladry ("Metafizyka") to rubato tone poems ("Song for H"), episodic raptures ("Tutaj—Here") and pensive melancholy ("A Shaggy Vandal"). Two versions of the title track move from unfettered elegance ("Wislawa") to incendiary displays of power that are virtuosic without ever resorting to self-congratulatory pyrotechnics ("Wislawa, var."). The rewards of this quartet are plenty good enough without relying on the kind of back-patting gymnastics that all-too-often unnecessarily define whether or not a group is succeeding.

Instead, while every member of this group clearly shines individually and collectively—has there been a more imaginative bass/drums pairing, in recent years, than Morgan/Cleaver, who effortlessly groove when necessary, but with ears ever-open to respond to or push against what their partners are up to?—and there are impressive solos aplenty, it's always in service of Stańko's insidiously recognizable writing. Stańko's tone, with its characteristic grit, speaks of a lifetime of experiences good and bad; and his ability to levy visceral moments almost instantly contrasting with passages of revealing vulnerability remain unparalleled to this day.

Every one of Stańko's groups since Matka Joanna has been exceptional—each with its own definitive strengths—but none has afforded the trumpeter the breadth of freedom heard over the course of Wislawa's two discs, twelve songs and one hundred minutes. Stańko's quartet with Wasilewski slowly grew into freer playing over the course of seven years but never lost its innate lyricism; despite the occasional moment of departure, his Dark Eyes quintet was very much about time; and his Leosia quartet, even with players as capable of motivic melody as Stenson and Jormin, couldn't help but interpret those qualities in the context of Oxley's more liberated approach to time.

With Wislawa, Stańko has it all, with a group whose possibilities already seem limitless. With an unmistakable allegiance to the tradition, even as it twists, turns and occasionally collapses its supporting structures and introduces incidental contextual ideas from beyond, Stańko's New York Quartet feels like the group he's been searching for all along.