Laurence Hobgood: When the Heart Dances

BY JOEL ROBERTS
September 4, 2009
Sign in to view read count 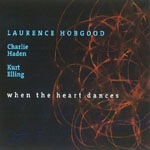 Laurence Hobgood is one of those artists whose undeniable talents beg the question, "Why isn't he better known?" In Hobgood's case, part of the reason may be that he's spent most of the past decade and a half in a supportive role, as pianist and musical director for singer Kurt Elling—a pretty good gig, but one that may have prevented him from garnering more attention. At any rate, it's no exaggeration to call the 49-year-old Chicago-based musician one of the most accomplished pianists of his generation, as his latest CD, a duo recording with the estimable bassist Charlie Haden, makes abundantly clear.

Haden is especially fond of bass-piano duos. He played a week at the Blue Note club this summer with a rotating cast of top pianists, including Kenny Barron, Paul Bley and Bill Charlap, and he's recorded memorable duet sides with Barron, Hank Jones, Hampton Hawes and others. But he and Hobgood make a particularly strong pairing. Both are passionate, introspective performers with a minimalist bent; neither plays a note more than is needed.

Nearly all the 11 tunes here, evenly split between Hobgood and Haden originals and nicely varied standards, are taken at a slow, unhurried pace. The opening track, for example, the campy '50s pop tune "Que Sera Sera," is transformed into an elegant, moving ballad while Hobgood's "Sanctuary," one of two solo piano pieces on the album, is a gospel-meets-Keith Jarrett tour de force. The album reaches its emotional pinnacle on the closing number, a powerful reading of Don Grolnick's "The Cost of Living," which Haden originally recorded with Michael Brecker more than 20 years ago.

Elling also lends his resonant baritone to three tunes, including a moving rendition of Haden's "First Song." There's a clear sympathy among all three performers, making this subdued but stirring album a quiet cause for celebration.