BY TROY COLLINS
October 5, 2011
Sign in to view read count 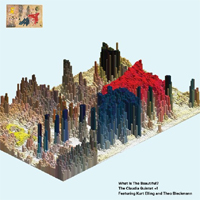 Jazz and poetry have a longstanding relationship that precedes the postwar experiments of the Beats, dating back to the Harlem Renaissance. As with any artistic collaboration, the cooperative efforts of improvising musicians and poets have yielded mixed results over the years. One of the first artists to successfully explore this territory (with John Cage and Charles Mingus) was Kenneth Patchen (1911-1972), a poet, novelist and painter whose innovative work ranges from political protest and sardonic humor to sentimental romance. In honor of Patchen's 100th birthday the University of Rochester commissioned forward-thinking composer John Hollenbeck's flagship ensemble, The Claudia Quintet, to set some of Patchen's prose to music.

Hollenbeck recruited two very different vocalists to articulate Patchen's poems on What Is the Beautiful?. Theo Bleckmann is one of Hollenbeck's most dependable collaborators, often performing with him in a variety of contexts—from intimate trios to big bands. His ethereal phrasing and diaphanous tone infuses a song-like air to one half of the album, with the other hemmed by Kurt Elling. One of today's most celebrated male vocalists, Elling's rich tenor and dramatic cadences bring a cinematic flair to Patchen's surreal and emotionally profound narratives.

Incorporating vocals is a novel but not entirely new concept for the Quintet; that Bleckmann and Elling so convincingly assimilate themselves into the veteran unit's sound world is most impressive however. Bleckmann's impressionistic detours drift gracefully into semi-abstraction, fading into the ether as easily as Speed's breathy clarinet. Elling's ability to modulate his diction into different personalities is even more striking, as he demonstrates on the funky "Job," where he performs a virtual duet with himself. On the poignant closer "Opening the Window" Elling's extended syllables and distorted annunciation matches the harmonic bends of Gress' elastic fretwork, creating phantasmagoric discourse between form and content.

Long considered one of the scene's most unclassifiable groups, The Claudia Quintet integrates Patchen's iconic verse into their oeuvre with an organic grace that brings his words to life. A unique merger of evocative poetry and avant-garde jazz, What Is the Beautiful? is a sophisticated work of art whose emotional resonance is as profound as the intricate formal elements that support it.

Showtime/23rd Street Runs into Heaven; The Snow is Deep On the Ground; Mates For Life; Job; Do Me That Favor; Flock; What Is the Beautiful?; Beautiful You Are; Peace Of Green; The Bloodhounds; Limpidity Of Silences; Opening the Window.