BY MARK CORROTO
October 6, 2011
Sign in to view read count 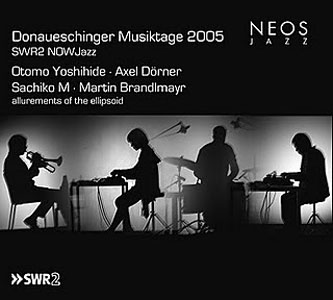 The minimalist improvisation of Otomo Yoshihide's Quartet, assembled for the 2005 Donaueschinger Music Festival, delivers a thoroughly abstract sound that could never be described as obtuse.

This coming together of heavyweight improvisers yielded two discs—one, a studio session and the other, a live performance—recorded over three days. Those familiar with the genius of Yoshihide's music can follow his career from the noisy rock of his band Ground Zero to his swinging free jazz recordings for small and large ensemble. His previous releases include two 2010 tributes: one, to Albert Ayler, Bells; the other, to Tortoise and Chicago Underground Trio. Rounding out the quartet is reductionist trumpeter Axel Dorner, a player equally suited for post-post-bop, as heard in his Thelonious Monk tribute band Die Enttäuschung, or as a minimalist player in Phosphor.

Here, the band maintains a quiet, almost meditative sound. Recorded in both 5.1 surround SACD sound and simple two-channel stereo, the quartet relies on silent passages, with nary a noisy surprise of babble, especially on the studio recording of the first disc. The players seem content to listen and contribute (sometimes hesitating) gestures. Dörner's breathy fluttering floats over an undercurrent of M's high frequency pitches and whistles. Likewise, Yoshihide is apt to deliver electronic hum as if it were a breath being expelled.

The studio recording appears as an ancient forest of 800 year-old redwood trees, with the implication that the trees' conversations are not to be hurried, while CD2, the live disc's "Allurement 3" and "Allurement 4" are (just a wee bit) noisier, the players interacting more with overlapping sounds. Brandlmayr continues to eschew his drumsticks for hand taps and pats, while the collective conversation lifts. Dörner's breathy shudders bounce off the pings and pops of electronics, as the scratchy pops of a vinyl LP repeat in some sort of science fiction B-movie soundtrack.

In both the studio and the live performance discs, time—or the sense of musical time—is almost nonexistent. These four improvising players are participating in a classical dialogue of the empirical-versus-metaphysical nature of sound and music creation.