By Troy Collins
October 6, 2011
Sign in to view read count 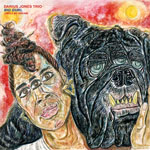 Once again drawing on his Southern roots for inspiration, Jones revels in a program that runs the gamut from tender balladry to testimonial fervor—with a penchant for all things funky underscoring the date. Infusing the proceedings with a judicious dose of "soul power," Jones' elastic vibrato and acerbic tone imbues lingering glissandi with as much pathos as blistering scalar runs. Working subtle variations across a variety of approaches, Jones hones in on each unique number with extraordinary attention to detail. He punctuates the thorny opener "E-Gaz" and abstracted funk of the quixotic closer "Ol' Metal-Faced Bastard" with strategically placed multiphonic accents, overblown notes and caterwauling trills that fortify the tunes' underlying structures. Conversely, he extends the melodious resonance of the heartfelt ballad "Michele Hearts Willie" with long sonorous tones and amplifies the forlorn sentiment of "I Wish I Had A Choice" with his fluid vibrato, crafting melancholy lyricism from the upper ranges of his horn.

Although Jones' breathtaking technique and unfettered creativity could easily dominate the session, he proves his mettle as a magnanimous leader by providing ample solo space for his sidemen, whose accompaniment borders on the clairvoyant. Among numerous interjections and asides, Lane's imposing arco drones on "My Special "D"" and Nazary's thrilling trap set workout on the manic "Chasing The Ghost" stand out as highlights.

In a set dominated by originals, "A Train" provides historical context for Jones' probing excursions, establishing his deep-seated relationship to the tradition. The trio reinterprets the rearranged Duke Ellington chestnut with a pithy blend of nostalgic reverence, coruscating expressionism and futuristic swing, culminating in a brief but bluesy hip-hop styled coda that conceptually encapsulates almost the entire 20th Century lineage of Black music in America.

Fulfilling (and exceeding) expectations, Big Gurl (Smell My Dream) is a rightfully compelling follow-up to his stunning debut. With another installment already in the works, Jones has set the stage for a winning series of albums designed to document his rise as one of the most impressive and unique voices of our time.