BY DORON ORENSTEIN
May 3, 2011
Sign in to view read count 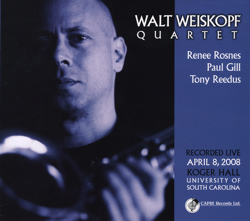 Besides being the tenor man onstage with Steely Dan, Walt Weiskopf is first and foremost a prolific solo artist. With over 15 critically acclaimed recordings as a leader, Walt is not one to rest on laurels collected over the course of years, playing alongside legends such as Buddy Rich, Frank Sinatra, Toshiko Akiyoshi, and Vanguard Jazz Orchestra. As one of jazz music's foremost post-John Coltrane voices on the saxophone, Weiskopf's tenor sounds uniquely vocal, almost wailing, and capable of burning a hole in the side of an armored truck. Like Coltrane, Weiskopf boasts virtuosic command of the instrument as evidenced in his complex, flurried, and gimmick-free solos.

That Weiskopf is a saxophonist's saxophonist is evidenced by recording his first live album at the bi-annual North American Saxophone Alliance convention. Playing to a crowd that's not easily impressed, the quartet packs its punch, courtesy of Weiskopf's stellar compositions and arrangements bolstered by the backing of a world-class rhythm section. Due to the untimely passing of the quartet's brilliant drummer, Tony Reedus, Walt Weiskopf: Quartet Live is dedicated to the man and his legacy. Offering a harmonically rich backdrop along with nimble-fingered and inventive solos, Renee Rosnes' piano glimmers across the sonic spectrum with grace and subtlety, while Reedus and bassist Paul Gill hold down a rock-solid groove.

The unpredictability of Weiskopf 's compositions is striking. Kicking off the album is "Man of Many Colors," which sounds like an acoustic version of a tune that could be found on a Weather Report album. However, once the melody ends, the no-nonsense, straight-ahead burning begins. The medley, consisting of Rosens' "Dizzy Spells" and Weiskopf's "Jay Walking," explores beatific melodic terrain atop the chord progression of the jazz standard "Con Alma." The group stretches even further with "Scottish Folk Song," with its shades of the distinctive folk-jazz heard on seminal European record label ECM. These original tunes, combined with a few standards, lead to an album that is a delicious concoction of blowing session and compelling compositional showcase.

Doron is a based in Los Angeles, is a seasoned saxophonist, and founder of BestSaxophoneWebsiteEver.com