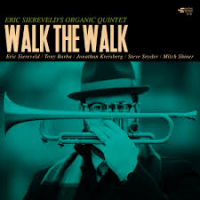 The "organic" in trumpeter Eric Siereveld's Organic Quintet doesn't mean the group has no artificial ingredients or synthetic preservatives; rather, it denotes the fact that the quintet's modus operandi rests in some measure on the well-defined tone colors produced by Steve Snyder's indispensable Hammon B3 organ. The word "indispensable" is used because it is Siereveld's purpose to keep one eye securely on the present while peering with the other toward the history-making tradition of jazz-organ groups led by such giants of the genre as Jimmy Smith, Mel Rhyne, Big John Patton Jack McDuff, Don Patterson and, more recently, Joey DeFrancesco.

As was the case then, so it is now, with bop and blues most often in the driver's seat as Siereveld gives them a new spin with "The Last Innovator," "Toughin' Up," "The Other Side of the Hudson," "Split-Finger" and "B-Town Bop" (a.k.a. "Out of Nowhere"). Siereveld and guitarist Jonathan Kreisberg co-wrote "Walk the Walk," Kreisberg and Danish bassist Morten Haxholm "Occam's Razor." For a change of pace, the quintet rounds out the session with Rodgers and Hart's lovely ballad, "Bewitched, Bothered and Bewildered."

"Hudson," a slow-burning blues, summons to mind the sort of soul-drenched enterprises once championed by Gene Ammons, Sonny Stitt, Dexter Gordon and their cousins, while "Toughin' Up" pursues a similar course but on steroids. On each, Tony Barba's assertive tenor saxophone sets the pace, closely followed by Siereveld, Snyder, guitarist Kreisberg and, for emphasis, drummer Mitch Shiner. Kreisberg frames another handsome solo on the well-grooved "Walk the Walk," as do Siereveld and Barba. Siereveld, Kreisberg and Snyder display their formidable chops on "Occam's Razor," another fast-paced blues, while Aaron Gochberg's congas enhance the propulsive finale, "Split-Finger" (shades of Lee Morgan).

For what it is, the album is exceptionally well-planned and superbly played by all hands. For those who can't get enough of blues and bop, a lavish treasure chest.

The Last Innovator; Toughin' Up; Walk The Walk; Bewitched, Bothered, and Bewildered; Occam's Razor; B-Town Bop; The Other Side (of the Hudson); Split-Finger.