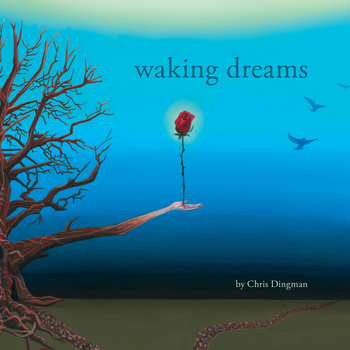 Many jazz releases suffer from the same old "song and dance" syndrome—a couple of obligatory ballads (song narrative) sprinkled between numbers of up-tempo (dance) tracks. This repeated programming can get old very fast. But this is not the case with Waking Dreams , the long overdue and brilliant debut by vibraphonist Chris Dingman.

Emerging as a stylist with a pliable touch and warm presence, Dingman carries the deep tradition of patriarchs (Milt Jackson) and vibrant contemporaries (Stefon Harris). He is cut from the same mold as the prodigious peers who contribute to the recording—saxophonist Steve Lehman and trumpeter Ambrose Akinmusire among others—young thinkers who have expressed their own visions of modern jazz. With verdant ideas taken literally from the vibraphonist's REM sleep, the atmospheric set is beautifully rendered and thoroughly accessible.

The music reflects the vibraphonist's tonality—graceful, calculating, and inquisitive. A theme runs through the program as interpreted by a group of rising stars. The onset is cerebral in "Vijayanagara," as Akinmusire and alto saxophonist Loren Stillman meander peacefully through the fugue-like melody. But the vibe shifts harder with "Jet Lag," one of the release's more groove-oriented pieces, marked by Joe Sanders's power bass, drummer Justin Brown's tempestuous rhythms, and erratic solo flights, only to end with Dingman's sweeping volume swells.

The tracks are vignettes of imagination. There's sadness and allurement in "Manhattan Bridge," and austere refinement in "Same Coin" colored by strokes of flute and clarinet and a lovely spot by pianist Fabian Almazan. And there's the whirlwind title track, where the musicians maneuvering in and out of its increasing intensity. Dingman is illusive, a master of disguise; his mallets adding delicate shades and hues. But he can also ignite, as in "Clear The Rain," with a solo like wildfire, developing slowly and then spreading quickly.

Akinmusire's presence is also important; he can carry a melody (the aforementioned "Clear The Rain") or add depth and imagery in "Nocturnal," a piece that is as compelling as a cinematic score. Furthermore, these tracks highlight another point—Dingman is a serious composer. Whether it's the arc of "Zaneta"'s swing or the reciting of poetry in the darkly lit "Epilogue: Stillness," his debut is a work of art and form. To bring ideas into fruition—let alone ones from dreams—into music that's articulated at this level, is something to admire.