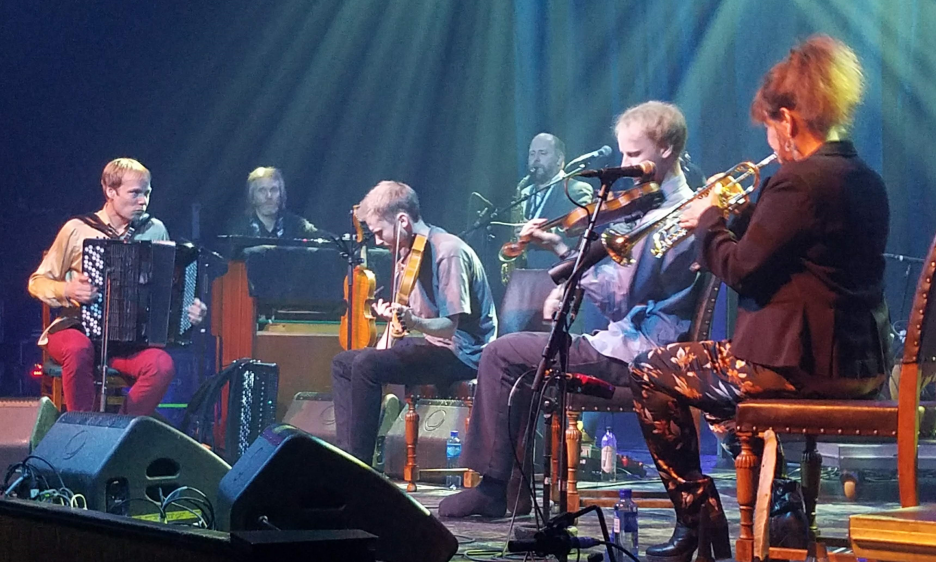 ...a special poetic resonance settled in at this year’s convergence at the Vossa Jazz Festival, conjuring a special emphasis on the special relationship and complementary melding of Norwegian traditional folk music—with its enigmatic 'blue notes' and sense of space—and jazz elements, including free improvisation.

There are bigger fish on the storied and seemingly ever-healthy Norwegian jazz festival circuit than Vossa Jazz, but it has its own brand of soulfulness. The kickoff event on a Nordic festival list including later blowouts in nearby Bergen, Trondheim, Molde, Kongsburg, and Oslo, Vossa Jazz is a deceptive little powerhouse occasion all its own, nestled in the lakeside town and winter ski haven, pop. 15,000, and whose other main tourist-luring event is an extreme sports festival. It can be said that Vossa Jazz, too, serves up extreme experiences: take, for example, the wild free range but semi- structured late-night set by the band known as The End, this year.

Somehow, a special poetic resonance settled in at this year's convergence in Voss, conjuring an emphasis on the special relationship and complementary melding of Norwegian traditional folk music—with its enigmatic "blue notes" and sense of space— and jazz elements, including free improvisation. In the rural and lyrically beauteous Voss, the folk-meets-jazz by the lake aspect rings truer than elsewhere, not the least of which reasons is the presence here of the Ole Bull Academy, the country's premiere "folk music academy," where many of the festival's intriguing shows take place in its Osasalen venue.

Most notably, this folk-jazz-mysticism Norwegian tradition was delivered boldly and atmospherically by accordionist Frode Haltli, with his large, recently formed group, aptly dubbed the Avant Folk Ensemble—which recorded for the Hubro label and is starting to make festival rounds. By my biased account, Haltli's mesmerizing and newly-commissioned set, for a ten-piece ensemble including Hardingfel player Erlend Apneseth and conventional violin, horns (with saxophonist Rolf-Erik Nystrøm, also in Haltli's juicy cool band POING), was the most memorable show of the Voss fest.

The Avant Folk aggregate wove skeins of ensemble-improvised passages with assured soloists (the leader included), free zones and folk-ish melodies (operative qualifier: ish). A clearly Norwegian flavor presided, but the musical trajectory also veered off in the general direction of folk traditions from American and Arabic sources (Haltli reportedly had his accordion specially tuned for the Arabic passage). Haltli, long renowned for his side-person work, orchestral projects, work with avant-vocalist-composer Maja Ratjke and more, is riding high under his own name with Avant Folk, a moving cultural marriage which seems fate-kissed and in the right hands.

Norwegian folk's natural kinship with jazz and improv sensibilities was a recurring theme, however intentionally, elsewhere in the festival program this year. Haltli appeared as a special guest earlier on Saturday in the intimate Osasalen space with Apneseth, a pizzicato-leaning Hardingfel player who is also in Avant Folk clan, with a set basking in beguiling atmospherics and an electro-acoustic mesh of a meditative order. Vintage field recordings of Norwegian tunes occasionally sneaked into the sonic mix—like a friendly/ghostly reminder of the cultural root system tapped anew by this group.

In the same space on Sunday at noon, the new and inspired trio Tanaka-Lea-Strønen (the young pianist Ayumi Tanaka, saxophonist-vocalist Martha Lea and veteran drummer Thomas Strønen) offered its own entrancing folk-jazz chemistry, seamlessly moving from antic free play to folkish tunes and melancholic songs. As disparate as the musical idioms might seem, the juxtapositions never felt jarring or arbitrary but informed by a fresh collective logic. This is a trio to keep tabs on.

Later that afternoon, the Osasalen hosted another young group ripe for the title of "discovery" act of this festival, the sextet with the deceptively cheeky name Spacemusic Ensemble. Suggestions of kitschy psychedelia are quickly flicked off in the presence of this innovative art-rock-jazz ensemble (evenly split by gender, incidentally), with its intricate lines often delivered by saxophonist Signe Emmeluth, guitarist Karl Bjorå and the wonderfully versatile vocalist Rohey Talaah. Parts and are passed around, also to pianist Guostė Tamulynaitė, tuba player/electronicist Mangus Bevik Lovseth and subtle drummer Andreas Winther. Calling this music prog-fusion only goes so far in describing its original vision.

In another venerable tradition at Vossa Jazz, which distinguishes it from its Norwegian jazz fest colleagues, there is the legendary smalahove, a ceremonial sheep's head dinner tradition in this Hardanger region in western Norway. Once reserved for working class and farming folks, but now a delicacy sought out by tourists (and post-Anthony Bourdain "extreme cuisine" fans), the smalahove is an acquired taste, of course.

Some visitors recoil at the thought, and the sight, refusing to actually sample the flavorful and heady entrée. Others (present company included, and reportedly, {[Abbey Lincoln}} and Shirley Horn during their visits here) relish the experience, savoring the flavoring while also doing due moral diligence not to waste parts of the animal killed for food—eyeball and all—and washed down with the anise-ish, high-octane Scandinavian liquid courage known as aquavit. Strategically, Vossa Jazz' annual smalahove falls smack in the middle of the three-day festival, as a fete following the annual "Tingingverket" commissioned work unveiling. (One famous "Tingingverket" from the festival archives was Nils Petter Molvaer's classic "Khmer").

The guest of honor (and head of the smalahove table) this year was jazz-rock guitarist Hedvig Mollestad, whose fresh and ink-still-wet 75- minute piece included such guests as rightly acclaimed Portuguese trumpeter Susana Santos Silva, rising to the occasion and bringing along Miles Davis-y vibe and voodoo to her parts. Contrasting her typical trio mode, Mollestad has fashioned here an intriguing new type of chamber hard rock-fusion animal, with material built around feisty odd-meter riffs, snaky guitar-trumpeter melodies, and even a hint of Ted Nugent (or was that my imagination that I heard an echo of "Cat Scratch Fever" early in the score?).

The third commissioned work this year went to the impressionistic fusion construction created by twin keyboardists Ståle Storløkken (from Supersilent and Elephant9) and John Erick Kaada, with drummer Tor Haugerud in the foundation. Diverse qualities of atmospheres, alternately edgy and dreamy, along with scored themes and thudding rock-powered passages, came together beautifully.

Jazz Festival orthodoxy often dictates that late-night programming slots are often filled with acts more about the party and groove agenda than serious jazz content, partly to lure a young crowd ready for primal, late-night romping. This year, Vossa Jazz went in the opposite direction with two of the stronger sets of the fest— the free-punk-progressive sonic potency of The End (featuring wily saxophonists Mats Gustafsson and Kjetil Møster and Swedish avant-vocal master Sofia Jernberg) on Friday, and the dry-witted and sharply-dressed Finnish band Gourmet (featuring the great saxophonist-prankster Mikko Innanen and fierce, anarchic-on-demand accordionist Veili Kujala) on Saturday at midnight. The End pumped out a cerebral punk jazz energy—even stoking a mild-mannered mosh pit moment in the crowd, while Gourmet served as this fest's comic relief quotient, mixing up its surf-spy grooves, polka and retro kitsch with joking antics but lined with dazzling musicianship along the way.

On Sunday, ECM-linked saxophonist and semi-sage Trygve Seim provided that day's programming with its highlight show, with Eick as guest. (On Saturday afternoon, I heard Seim in an impromptu outdoor "setlet" with Haltli, down by the lake and next to a portable sauna. Only in Voss).

In the end, the 2019 Vossa Jazz will also be remembered for its beginning. The opening act was the majestic and uniquely soulful Malian great Salif Keita, whose riveting band and serpentine vocal turns gained extra potency from the fact that, at age 70, Keita has decided this will probably be his final tour. Towards the end of the set, festival director Trude Storheim (in place since 2008) came out to give him a bouquet and this descendant of Malian royalty was touched and tearing up, to the point of bowing before her. Storheim was, in a way, queen for a weekend in western Norway, presiding over another magical meeting by the lake.