By Dan McClenaghan
April 22, 2019
Sign in to view read count 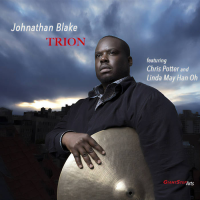 Johnathan Blake, an in-demand drummer who has contributed to recordings by trumpeter Tom Harrell and guitarist Russell Malone, presents an ambitious two-CD set, Trion, a chordless trio affair with a pair of fellow first-callers, saxophonist Chris Potter and bassist Linda May Han Oh. The ground was broken for this particular format by saxophonist Sonny Rollins' A Night At The Village Vanguard (Blue Note, 1958), a freewheeling exploration of jazz standards and Great American Songbook tunes.

Where A Night At The Village Vanguard sounds raw and unrehearsed—a seat-of-the-pants recording if ever there was one (in a very good way)—Trion is a slightly tighter presentation of music, with Potter displaying as much muscle as Rollins. A level of familiarity pervades as Potter played in the Mingus Big Band with Blake in the 1990s, and also on Blake's 2014 disc, Gone, But Not Forgotten (Criss Cross Records). Linda May Han Oh is newer to Blake's orbit; she has played with him in trios with saxophonists Mark Turner and Jaleel Shaw, and she steps into this situation with powerhouse flexibility and virtuosity.

Blake opens both discs with brief drum solos, "Calodendrum" on Disc One—the name of the African evergreen tree, a nod to the drum language's roots—and "Bedrum," meaning "to drum about in celebration," on Disc Two.

Following the drum opening on Disc One, Potter offers an intense-yet-ghostly tenor intro that gels into "Synchronicity 1," from the Police songbook, seventeen minutes of sustained intensity that set the tone for two CD's worth of inspired, no-hold-barred trio music. "Trope," an Oh composition, shifts from a moody bass intro into a melodically Near Eastern-sounding tune, with the heartbeat of the bass creating a disturbing EKG readout.

Potter contributes two pieces, and Blake adds several of his own. All are delivered to create a cohesive whole, spanning both discs, featuring a consistently spirited threeway interplay and a crisp clarity of input all around, with Charlie Parker's "Relaxing At the Camarillo" serving as a touchstone to early bop, with the trio tearing it up in grand style. No relaxing at all.

Chordless trio outings have become commonplace since Sonny Rollins introduced the idea. Few hit the level of excellence of Trion.