By JACK BOWERS
November 2, 2013
Sign in to view read count 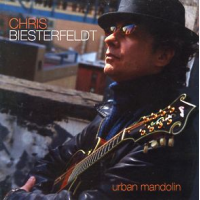 A mandolin player opening his first album as leader with Dizzy Gillespie's mercurial "Bebop"? Wow! That takes a lot of (fill in the blank). But Chris Biesterfeldt, best known as a guitarist, and for Broadway shows at that, not only sails through those tricky changes but handily nails everything else on this impressive trio album whose other protagonists are bassist Adam Armstrong and drummer Eric Halvorson.

The mandolin, not exactly a guitar but somewhere in the neighborhood, is most closely linked to bluegrass music, which makes Biesterfeldt's decision to set aside the guitar, at least temporarily, to record exclusively on the mandolin that much more audacious. The gamble pays off, as Biesterfeldt breathes life and energy into a variety of engaging tunes from jazz standards by Gillespie, Charlie Parker, Thelonious Monk, Eddie Harris and Jimmy Smith to lesser-known works from the jazz and pop realm and even one classical exercise, J.S. Bach's "G-Minor Presto."

While the mandolin lacks the guitar's range, elegance or subtlety, Biesterfeldt makes the most of its assets, which include unambiguous good humor and visceral appeal. This is music to which toe-tapping is compulsory, not optional. And even though Urban Mandolin is blazoned as jazz, the specter of bluegrass often tarries close at hand even as Biesterfeldt and his teammates labor earnestly to assure he remains at arm's length. Such is the nature of the mandolin, even in the capable hands of a jazz partisan such as Biesterfeldt.