By Phillip Woolever
November 17, 2019
Sign in to view read count 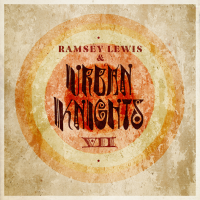 Back in 1995, an executive named Carl Griffin at Ramsey Lewis' record label reportedly conceived the idea of forming a jazz "super group" around the well-established Chicago pianist. The resulting all-star project, deemed Urban Knights, featured Grover Washington, Jr. and a rhythm section with Omar Hakim and bassist Victor Bailey, who'd worked together in the early '80s lineup of Weather Report. On five subsequent albums over the next quarter century, a rotating Urban Knights cast has showcased famous players and introduced younger guns, with Lewis as the only constant member. While various formations and recordings were generally well-received, there was also plenty of lukewarm feedback from critics who downplayed Lewis' later musical merits based on the perception he offered a watered down, generic version of jazz that paled in comparison to milestones like Sun Goddess (Columbia Records, 1974) or Wade In the Water (Cadet, 1966).

This project may gather much the same reception, but the project should also continue to please the many traditional jazz fans that prefer their jazz served in a more conservative, sunny side up manner. This is for them, straight, no chaser.

The latest configuration of knights is a windy city crew who toured as the Ramsey Lewis Quintet in 2017, each familiar enough with the repertoire to make everything here seem like a family reunion as they revisit and update previous cuts. Only a few songs are new offerings, including a couple covers; but if the album is indeed Lewis' coda it's a highly respectable one, well worthy of his catalog and a tribute to rare individual standards. Even if it is judged as less than an optimal effort, it still holds up well compared to most of the year's jazz releases.

Guitarist Henry Johnson (guitar) steps to the front in "Sharing Her Journey," a song with picking just about as crisp as it gets. This piece could serve as the record's calling card and it's a definite ace. Too bad Lewis' conclusive piano musings weren't included for another minute or two during the cut's brief, intriguing fade out. Subtle but distinct power on "The Rose" features Johnson again, accompanied by trumpeter Maurice Brown in a tribute to Lewis' late collaborator Maurice White of Earth, Wind and Fire. This is a gentle gem with way-of-the-world type accents that gain plenty of steam.

It must be noted that what, if anything, Lewis played on a couple of the previously listed songs can barely be heard. In truth, there are times when the instrumental activity makes it seem the project might have been called Urban Knights with Ramsey Lewis instead of the actual reverse billing, but in no way does that hinder this excellent collection. Lewis comes through loud and clear for the duration of "The Spark," and deftly maintains plenty of firepower on a track that affirms the band's unified strength. Considering Lewis composed this and another pair of standouts, the record's billing is probably appropriate after all.

"I'll Never Forget You" is a cascading ballad by Lewis that opens as a duet between his Steinway and Heath's cymbals, then winds down sweetly amidst Gant's keys and a bass line that resonates so much it could pass for an acoustic upright. Lewis' discography indicates it's a brand new song. The tempo changes with an added twist to some barrel house blues on the Jimmy Reed standard "Baby What You Want Me to Do." Lewis' crew can probably play this song in their sleep, and there aren't many groups as equal to the task. "And I Love Her" is the weakest link here, a Beatles' mutation that provides plenty of ammunition for those who dismiss such smooth jazz approaches.

"Armando's Rhumba" puts a harder edge back on with some nice fills behind Ramos' nimble upright plucking on the Chick Corea tune.The Oscar Rabach finale "Trees" returns to the solo piano keys where many things began, and proves again that playing it straight is often exactly the right touch. The producer, Ramsey's son Fryne Lewis, and mix master Danny Leake deserve recognition for the album's exceptional overall sound.

Since the master himself recently stated retirement is imminent, AAJ asked Lewis how the recording process felt this time around, and if anything stood out or seemed different than before with the band or the studio.

"No, because we approach the studio recording just like a live show," Lewis responded. "The only difference is the separation in the studio, but we try and situate ourselves so we can still see each other while we're playing. One thing that stood out to me was the fun I had recording the solo piano pieces. The song "Trees" was one of my dad's all time favorites. When I was 12 years old he would have me play that song and sing along with me. As I look back on that tears come to my eyes even now. "Trees" and "Dear Lord," those pieces stay with me and are dear to my heart."

Let the debate begin again regarding Lewis' current creative merits. Here's the simple math: master craftsmen plus precision tooling equals rare quality. If this album had some sax it could justifiably go into a time capsule as comprehensive representation of the jazz genre. Does the album take any chances or explore previously unknown ground? No, but there's no need for that after Lewis showed jazz pianists a direction for decades, and this band's skills eliminate chance from the equation.

There's really no need to ponder aesthetics. Just chill out and enjoy.

Dear Lord; Tequila Mockingbird; The Shape Of My Heart; Sharing Her Journey; The Rose; The Spark; I'll Never Forget You; Baby What You Want Me To Do; And I Love Her; Armando's Rhumba; Trees.