Dee Alexander is one of Chicago’s most gifted and respected female vocalist/songwriters. Her talents span every music genre, from Gospel to R&B, from Blues to Neo-Soul. Yet her true heart and soul are experienced in their purest form through her performance of Jazz music. From a soft, sultry traditional ballad, to a contemporary Jazz-Funk groove; from a high flying swing, to a scat-filled romp, Dee Alexander delivers each style with a passion and love of music that comes across in each and every note, and with a style and grace that is truly her own. Some of her recent career highlights include the following:

Besides being a phenomenal headliner in her own right, Dee has shared the stage with Ahmad Jamal, David Sanborn, Earl Klugh, Gerald Albright, Roy Ayers, Joshua Redman, and the O’Jays. Not being one to ever feel that the spotlight has to belong exclusively to her, Ms. Alexander has lent her considerable talents as a backup vocalist to the live performances of an array of many other well known artists i.e., Michael Manson, Michael Bolton, Phil Perry, Willie Clayton, and Zora Young and also performs with Ernest Dawkins’ Chicgo 12, Douglas Ewart’s Inventions and Nicole Mitchell’s Black Earth and Harambee Projects. Dee has also formed the Evolution Ensemble which is an acoustic group that consists of string instruments and percussion with a strong emphasis on original compositions.

Showing a limitless versatility, Ms. Alexander has performed with Muntu Dance Company of Chicago. Dee has been featured on various commercial spots, including Alpo, McDonalds, Pert Plus, the Illinois State Lottery, Diet 7Up, Pillsbury, Buick LeSabre, Commonwealth Edison, Dove, and Amoco. Ms. Alexander’s television performances include WBBM Channel 2 2005 Portraits in Color; WTTW Channel 11Check Please; WTTW Channel 11Chicago Tonite with Phil Ponce; WTTW Going Home Gospel with Sue Conway and the Victory Singers featuring Patti LaBelle; WTTW Arts Across Illinois 2001 with Malachi Thompson’s Freebop Band; and Bernie Mac’s HBO “Midnight Mac” Special. Ms. Alexander has also received the 2007 Chicagoan of the Year in Jazz Award and 2008 Jazz Entertainer of the Year by the Chicago Music Awards and was named the Best Singer of Chicago in July issue of Chicago Magazine. Ms. Alexander is also a member of the Chicago Chapter of the Association for the Advancement of Creative Musicians (AACM). Muntu Dance Theatre of Chicago honored Dee Alexander as the 2009 Alyo Awardee for Outstanding Service to the Arts. In January 2009, Dee Alexander’s CD “Wild As The Wind” was released on the BluJazz. Show less

Tuesdays on the Terrace: Dee Alexander 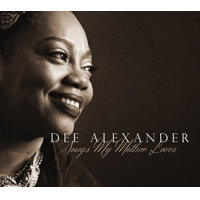 All About Jazz musician pages are maintained by musicians, publicists and trusted members like you. Interested? Tell us why you would like to improve the Dee Alexander musician page.