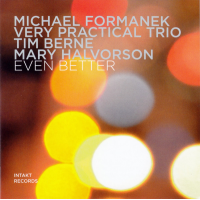 Composer and bassist Michael Formanek's Even Better is an adventurous compilation of bluesy abstractions with surprising twists and turns. Opting for a drummer-less trio format, Formanek gives himself room to negotiate the terrain with his own intimate rhythm. He is aided and abetted by his longtime collaborator, saxophonist virtuoso Tim Berne, and guitarist extraordinaire Mary Halvorson.

Formanek's style of playing is relaxed. His runs up and down the neck of the bass are, even at their most intense, relatively subtle. And the conceptual foundation of his compositions is structured, with themes that are engaging but extend over lengthy intervals. Often these themes are stated in unison by two of the trio members and sometimes by all three.

The compositions range from funky to slow to otherworldly. "Suckerpunch," the first track, features a jumpy theme accentuated by a pulsing Berne solo. It also demonstrates another quality of Formanek's style—a kind of interlaced approach to voicings as the sax, bass and guitar weave together in a tapestry of sound. "Still Here" has a sci-fi feel, made possible by Halvorson's mandolin and harp-like flurries underneath Berne's plaintive moans and atop Formanek's bubbly stew of notes. "Shattered" is a sad song ands suggest a painful remembering of some tragic consequence. Berne's expressive sax lines make the dark lament especially noteworthy. "But Will It Float" is a bouncy number that features tightly constructed unison sax and guitar lines and Formanek's floating bass. "Bomb the Cactus" is a boisterous and tuneful—almost sunny—song. Halvorson entertains with her strumming technique before breaking out in a dissonant, abstract rockish solo.

The album finishes with the only composition not written by Formanek, a cover of Scott LaFaro's delicate ballad "Jade Visions." There's a mellow blues reverence to the trio's playing on the number, suggesting the point where late night becomes early dawn as streetlights dim and sidewalk shadows change from black to gray.

There's much to admire in this effort. However, while the abstractions are engaging, they lack a passion that might have made them even more so. Formanek has produced a cerebral and sophisticated set of numbers, but one wonders what if there had been a bit more fire in the belly?

Suckerpunch; Like Statues; Still Here; Implausible Deniability; Shattered; The Shifter; Apple and Snake; But Will It Float; Bomb the Cactus; Jade Visions.