BY EDWARD BLANCO
November 29, 2013
Sign in to view read count 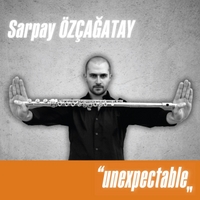 Born in Ankara, Turkey, Sarpay Ozcagatay is a flautist and EWI player who feels that the flute does not have the respect in the jazz world that it should. Accordingly, Ozcagatay is on a mission to change the perception of the flute as an accompanying instrument and believes the flute is as much a lead instrument as the jazz saxophone or trumpet. His first album as leader, Unexpectable (perhaps a reference to the correct spelling of "unacceptable"), is an unexpectedly well- conceived and audacious effort to showcase the flute in the pronounced role it certainly deserves. Now based in New York via Boston after studies at the Berklee College of Music, Ozcagatay is intent on becoming a flautist of note some day and is making the rounds and paying his dues performing in the rich jazz environment of the East coast.

Producing a very progressive modern sound, the flautist launches his first recording effort with a quartet of young players and features Berklee professor and saxophonist Ed Tomassi as guest on the last track and alternate rendition of "Tomassi's Coffee." The nine-piece repertoire opens up with the bristling "Garip" which immediately establishes the leader as the main voice on the album. Electric bassist Tyreek Jackson contributes the most ambitious piece of the album on the almost ten-minute "Elasticity" featuring brilliant solos from pianist Jesse Taitt, special effects from Ozcagatay and light drum work from Angelo Spampinato.

There's little question about the flute taking and keeping the lead on "New Angle" and Quest" as the leader's instrumental voice soars on these tracks delivering many refined solo moments. In what seems a departure from the basic theme of the album and in contrast to the final alternate track, the first version of "Tomassi's Coffee" is one funky adventure. In quiet contrast, the title piece and "Belli Degil" are two far more withdrawn and balladic-natured statements of music.

If, what flautist Sarpay Ozcagatay wished to obtain with this album, is a measure of respect and attention for the flute as a major jazz instrument, he may well have succeeded. Regardless of Ozcagatay's personal opinion about the flute however, Eric Dolphy, Herbie Mann, Hubert Laws, Tim Weisberg and Nestor Torres among many, many others, would probably disagree stating that the jazz flute arrived long ago, made a statement and continues as a major instrument in the jazz world today. I would tend to agree and would further add Unexpectable as evidence of that claim with Ozcagatay's inclusion as the newest member of the distinguished list of jazz flautists, to be forthcoming.