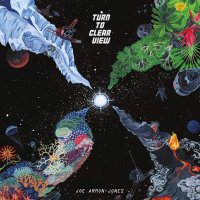 A cornerstone of London's underground jazz scene—as well as leading his own band he plays in Ezra Collective and groups led by the tenor saxophonists Binker Golding and Nubya Garcia—the keyboard player Joe Armon-Jones released his first own-name album, Starting Today (Brownswood), in spring 2018. A jewel of nu-fusion which owes almost as much to the Los Angeles R&B and funk scene as it does to British woke jazz, the album features Armon-Jones leading a lineup of fellow London luminaries including Garcia, trumpeter Dylan Jones and drummer Moses Boyd.

Turn To Clear View feels like it was slow-cooked over the same weed-stoked fire as its predecessor and features a near identical lineup. Its release follows two other summer/autumn 2019 albums featuring Armon-Jones: Ezra Collective's Afrobeat flavoured You Can't Steal My Joy (Enter The Jungle) and Binker Golding's Abstractions Of Reality Past And Incredible Feathers (Gearbox), a quartet album on which Golding and Armon-Jones showcase their formative roots in the century-old tradition which the new London jazz is seeking, not to replace, but to reconfigure.

To borrow a phrase from the late Harold Rosenberg, art critic on The New Yorker in the 1970s, Golding's album demonstrates for the hard of hearing that both his and Armon-Jones' young-blood disruptions of the imperial tradition are "emblazoned with the authority of the past." This is often denied by the new scene's nay-sayers, who assert that the musicians are ignorant of what came before them, that they could not play straight-ahead jazz if they tried, and other canards thrown at new brooms by old ones.

On Turn To Clear View, however, Armon-Jones scrolls forward once more to his other love, the lustrous melange that is nu-fusion. To say the album was "slow cooked" is almost literally true. Armon-Jones says he wrote the tunes in three or four days and recorded the basic tracks in two; but he then spent several months ruminating, tweaking and overdubbing.

Among the many resonances are those of Thundercat, Herbie Hancock and Brian Jackson. You may even hear distant echoes of yacht rockers Boz Scaggs and Steely Dan. London sleight-of-word merchants Jehst and Obongjayar are featured on two tracks and L.A.'s divine Georgia Anne Muldrow sings on another. The three-piece horn section—Nubya Garcia and James Mollison on tenor saxophones, Dylan Jones on trumpet—add rich backdrops to seven of the eight tracks, and Garcia and Jones contribute present tense hard-bop solos to three of them.

It all adds up to one well-upholstered, zoned-out stone delight.

Try Walk With Me; Yellow Dandelion; Gnawa Sweet; Icy Roads (Stacked); (To) Know Where You’re Coming From; The Leo & Aquarius; You Didn’t Care; Self: Love.