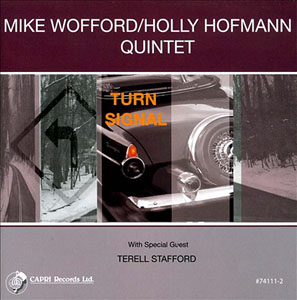 Holly Hofmann is an energetic, swinging, straight-ahead jazz flautist who has been performing for over 30 years. Mike Wofford, her husband, a recognized piano master, co-leads on Turn Signal, playing with an understated, intuitively rhythmic style.

The two now live in San Diego, California, but travel extensively for performances. Recording her first disc for Capri in 1989, Turn Signal is her twelfth CD as a leader, in a career that has included collaborations with pianists Kenny Barron and Cedar Walton, and bassist Ray Brown. Wofford has been on the scene since the sixties, performing with greats including singers Sarah Vaughan and Ella Fitzgerald, drummer Shelly Manne,and saxophonists Benny Carter and Zoot Sims. As drummer Jeff Hamilton has said that Wofford's musicality brings out the best in anyone he plays with.

The set list of seven extended tunes offers ample opportunity for everyone to stretch out and show their stuff. The disc is bookended with two stellar originals. The opener, Wofford's homage "The Dipper (for Horace Silver)," starts and ends with a stately unison line, prodded by a march tempo, slowly building in intensity, bringing in eloquent contributions from Hoffman, Stafford and Wofford. Hoffman's up-tempo closer, "M-Line," was written for her dog Emily, and features a hot flute/drum duo before the others come in to light it up this cooker and take it to a blazing finish.

Along the way, an extended take of Bobby Watson's tuneful "Karita," which shows off Stafford's considerable technique, is a highlight, as is Jimmy Forrest's bluesy "Soul Street," where Stafford and Hoffman take turns—trumpet wailing, flute down and funky—leading to a shouting horn chorus of a climax.

Wofford's talent is out front in a trio setting on Richard Twardzik's catchy "The Girl from Greenland." His sensitive interaction with Thorsen and Sellers is a pleasure to hear.

Altogether Turn Signal does signal a change in direction for Wofford and Hoffman, and the journey is well-rewarded.