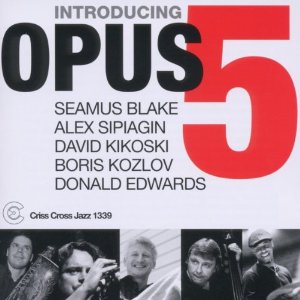 Collectively delivered jazz albums almost always fall into one of three categories: some are outings from neophytes looking to pool their resources, while trying to build a fan base from the ground floor up; others marry the musical skills of seasoned musicians who've crossed paths in various situations and/or share a commonality in approach; and the most commercially successful, yet artistically regretfully, are usually hastily conceived or rendered performances that simply attach several big names to a project in order to cash in and make a quick buck. Introducing Opus 5, with a to-die-for grouping of modern heavyweights who speak the same language, falls into the second category.

Every member of this multicultural quintet was baptized-by-fire in the world of Charles Mingus—having worked at various times in different incarnations of the Sue Mingus-driven groups that honor her husband's music and memory—but the material on this seven-song outing usually bears little resemblance to the bassist's compositions. Easygoing fare to ease the ears into the album (pianist George Cables' "Think Of Me"), bristling material with some fiery trumpet work from Alex Sipiagin ("Talltsman"), an odd-metered gem that showcases pianist/composer David Kikoski's uplifting solo work and puts Boris Kozlov's pliant bass on display ("Baker's Dozen"), and light, elegant bossa nova strains (Toninho Horta's "Ton To Tom") come first in the running order, but they don't come to define this band.

The final trio of selections, which include an electrified, muscular hard bop update which nods to Mingus in title and spirit more than sound ("Nostalgia In Time"), a soothing entry that puts saxophonist Seamus Blake's warm, yet lustrous, tenor on display, while also showcasing Sipiagin's softer side (Donald Edwards' "Asami's Playground"), and a Russian folk song arranged to highlight an inside-outside duality in this ensemble ("Sokol"), marks Opus 5 as an omnivorous entity that takes all music in and then spits it back out, refracted through its own multidimensional lens of musical perception.

While time will tell if this is a one-off outing or the start of a fruitful partnership, in the meantime, Introducing Opus 5 tells the story of five highly skilled musicians carrying out a shared artistic mission, and it proves to be a real musical page-turner.