By JIM WORSLEY
October 3, 2019
Sign in to view read count 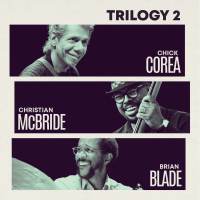 Only the cream of the crop takes the stage with Chick Corea. Bassist Christian McBride and drummer Brian Blade, churning like butter on tour with Corea, resulted in Trilogy (Concord Records, 2014). This sensational three-disc live recording was so well received it demanded, or at least most assuredly warranted, a command performance. Picking right up where they left off, the Chick Corea Trio now presents Trilogy 2. The "mere" two-disc offering is beyond simply "more of the same." The comfort zone, though strong on the first outing, has broadened and deepened. Three musicians of substance further engaging in each other's world can lead to beautiful moments of improvisational bliss. They clearly are having fun playing together, and that enjoyment is transferred onto the listener in droves. All the tunes are choice and well placed, but it is what they do inside the lines that pops, sizzles, and simmers. The amount of creative and opportunistic exploration between the notes is driven by the trust developed in one another and their inherent sensibilities.

If you haven't heard the original Grammy-winning Trilogy as yet, it perhaps should be noted that this is very much straight-up traditional jazz. Corea has ventured into many aspects of the genre in his storied career, from the avant-garde, to free, to electric, to acoustic, to fusion, and to even more free. Here you have a pure jazz trio that takes it to places where we haven't been, while still being familiar enough to appear as an old friend. There is a delicate balance of trio symmetry and soloing. The solos by all three masters are never forced or sound at all rehearsed. They glide in and out with a subtle ease and flow. As a unit they are clearly listening to each other and responding to the dialogue with a confidence of understanding that lends itself to thought-provoking interactions. They are in no hurry to get there, taking the listener on a wondrous journey. The ride out-weighs the destination, though the landing spot can be pretty sweet.

McBride and Blade deftly illustrate that there is more than one way to get it done. Their dynamics and interactions with Corea are vastly different than that of longtime collaborators Dave Weckl and John Patitucci. Not better, not worse, it's not a competition. It's fresh, improvisational jazz of the highest order. Although Corea handpicked all the song selections, McBride and Blade asked for, and received, the opportunity to play the Corea classic "Now He Sings, Now He Sobs." It is the first time it has been recorded since the original studio version on his first trio record with Miroslav Vitous and Roy Haynes as the title track of Now He Sings, Now He Sobs (Solid State, 1968). Over half a century later, Corea adds yet another brilliant chapter to his career and our ear.