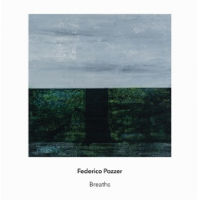 The Italian-born pianist and composer Federico Pozzer previously recorded as a member of the groups Sitting Bull and Falga, composing pieces for the latter. Breaths is the first release to spotlight his compositions. Having learned piano from the age of 8, getting into improvised music at 15, Pozzer moved to Holland in 2013, got into the free improv scene and also became interested in Morton Feldman, Bunita Marcus and John Cage; in 2016 he moved to Leeds to study for a masters degree in composition and came to know the music of Cornelius Cardew, Pauline Oliveros, Christian Wolff, James Saunders, G Douglas Barrett and Gavin Bryars. "Breath II," recorded in October 2017, and "Noises" and "Meetings," both recorded in January 2019, all feature Pozzer on piano and Lucio Tasca on guitar, the pair being joined by violinist Dejana Sekulić for "Meetings," and that trio being expanded to a sextet, including flute, cello and vibraphone, on "Noises." In keeping with the album title, on all three tracks the musicians' breathing affects the music in ways which are subtly different in each piece. On the thirty-four-minute opener, the three phases of breathing—inhaling, pause, exhaling—work as time cycles, with piano and guitar each playing one action within each phase; as the lengths of breathing phases are different for each player, rather than regulating time, this method introduces indeterminacy, bringing about changing combinations of sounds of different durations. Breath can be controlled to some extent, so the degree of indeterminacy is not too great and the guitar and piano combine together in ways that are pleasingly harmonious, aided by the fact that Pozzer did not over-elaborate the music they were required to play. Despite its length, the piece remains engaging throughout, standing up well to repeated listenings. "Noises," the sextet piece, was recorded with the doors and windows of the performance space open, in order to allow external sounds in. Only the pianist plays according to his breathing patterns, other musicians being instructed to react in different ways to the extraneous sounds they hear. Pozzer is full of praise for the other musicians, saying they did a really great job with the piece. The six players do not get in each other's way or clutter up the piece; they manage to integrate the external sounds with their playing, so that they sound like a natural part of the piece's soundscape. The closing trio track, "Meetings," employs another use of breath—the lead player (a role which rotates between the players) audibly exhaling as a signal to the other two to change the note they are playing—thus requiring concentration and interaction between the three. Despite the changed methodology, the track ends up being recognisably from the same source as the others, giving the album's sixty-two minutes a coherent feel. While Pozzer only composed his first breathing pieces in late 2016, on this evidence he has already developed a range of techniques which produce music that achieves a comfortable balance between stimulating and relaxing. He is one to watch...