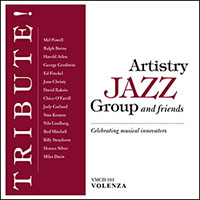 An absolute gem, featuring some of the best players in Scandinavia in an extremely well thought-out program of music, paying tribute to "musicians and artists who shaped new sounds and ideas." It's the brainchild of independent record producer Torgil Rosenberg and pianist Jan Lundgren.

Vocalist Vivian Buczek is a revelation, displaying full-fledged confidence and a maturity only hinted at in her previous recordings with the group. She performs great versions of Harold Arlen's bittersweet "Last Night When We Were Young" and George Gershwin's "Changing My Tune," switches with consummate ease from Queen of Cool June Christy to Judy Garland, albeit singing the best, bluesiest song in Garland's book, "The Man That Got Away," written by Harold Arlen and Ira Gershwin for the 1954 film A Star Is Born.

Buczek does her best with the rather dated "back to nature" lyrics of Lindberg and Mitchell's "As You Are" and turns in a fine wordless vocal on "Undercurrent Blues," by Chico O'Farrill—whose arrangements ushered King of Swing Benny Goodman, somewhat unwillingly, into the bebop era. She also chooses the closer, going for Miles Davis' "Boplicity" and handling Ray Passman and Holli Ross' high-speed "Bebop Lives" lyrics with great aplomb.

Hollywood composer David Raskin's "The Bad And The Beautiful" is one of two outstanding solo outings by Lundgren. The other is a lovely, lingering interpretation of Billy Strayhorn's "Lotus Blossom."

Guitarist Jacob Fischer's solo does wonders for "Fantasy" by Prince of Pretension Stan Kenton (based on a piece by classical composer Maurice Ravel), while Hans Backenroth plays some terrific bass on Horace Silver's "The St. Vitus' Dance."

Only rarely do albums come any better than this.

Palo Alto; Shirley Steps Out; Last Night When We Were Young; Bijou; Up An' Atom; Lost In A Summer Night; The Bad And The Beautiful; Undercurrent Blues; The Man That Got Away; Fantasy; As You Are; The St. Vitus' Dance; Changing My Tune; Lotus Blossom; Boplicity.