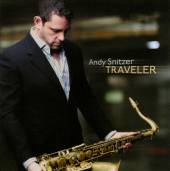 Even without uttering a single word, music can convey many moods, and Traveler, Andy Snitzer's first album in a decade, finds the saxophonist in a reflective mood. The degree of restraint and reserve in Snitzer's playing runs counter to many of his contemporaries, where loud and long soloing is standard operating procedure.

If overplaying can be excessive, underplaying is not always a virtue. Snitzer occasionally takes a few moments in the spotlight, but opts to be one of the musicians in the band instead of the star of the show. Perhaps in the years Snitzer spent touring and recording with Paul Simon, the The Rolling Stones and Bon Jovi, among others, he grew accustomed to stepping out of the spotlight.

Traveler gives the indication it's about movement and new surroundings, something that titles like ""Marseille," "Lausanne," "Taking Off" and "Earth From Above" do little to discourage. The music conveys a sense of time and atmosphere, and it is a quiet time at that. Snitzer was first discovered by pianist Bob James, and cites David Sanborn as one of his key influences, but it is another virtuoso, Michael Brecker, whom he most closely recalls here.

Traveler is like a good movie that doesn't go that extra mile to achieve greatness. It's never boring but it isn't a thrill ride either. It's good to have Snitzer recording again, and he's made a mature and accomplished album, but it falls short of being entirely engaging.