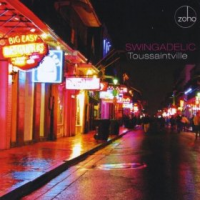 It's tempting to say that the great Allen Toussaint is a musical phoenix who rose out of the ashes of a Katrina-ravaged New Orleans, but that's not really true. Toussaint wasn't reborn when his city was in ruins; people just started to wake up and take notice of him again in the wake of that tragedy. Participation in benefit concerts, a well-publicized collaboration with Elvis Costello—The River In Reverse (Verve Forecast, 2006)—and a Joe Henry-produced jazz album—The Bright Mississippi (Nonesuch, 2009)—featuring clarinetist Don Byron, trumpet Nicholas Payton, guitarist Marc Ribot and other heavyweights put him back in the spotlight where he belongs.

Toussaint's importance may be lost on many who don't dig deep into the credits in liner notes, but his role in shaping the New Orleans sound in the latter half of the twentieth century can't be overstated. His Midas-like touch bestowed musical riches upon Dr. John, The Meters, Lee Dorsey and countless others. He came to epitomize the earthy, funky, raw-yet-refined sound that came out of the Crescent City in the '60s, '70s and beyond, but his music moved far beyond the city limits. Everybody from Little Feat to Devo has covered his work, paying tribute to Toussaint in some small way, and now, Swingadelic gives him an album-length nod with Toussaintville.

This little big band made a big splash with a salute to the music of oft-overlooked pianist Duke Pearson—The Other Duke (Zoho Music, 2011)—and they turn their attention to an ivory tickler of a different sort here. A fifteen song program finds the band delving into Toussaint songs both well-known and obscure with mixed results; the Pearson book fit them like a tailored suit, but Toussaint's far more diverse catalog proves harder to squeeze into.

Toussaintville doesn't discriminate when it comes to instrumentals and vocal numbers, which is a good idea in theory when paying tribute to this particular figure, but too much of the vocal weight is placed on the shoulders of pianist John Bauers; he's a firm and focused presence on the 88s, but his vocals don't always fit the surroundings they inhabit. The strongest vocal performances come from Queen Esther ("Ruler Of My Heart") and Rob Paparozzi ("Fairchild"), who both deserve more space.

Swingadelic tends to do better on the instrumental side of the equation, causing a fun ruckus on "Java," finding the right groove on "Get Out Of My Life, Woman," and turning up the heat on "Everything I Do Gonna Be Funky." They even manage to strip "Whipped Cream" of its hackneyed elements, giving it a down-south-on-a-riverboat quality. Another winner is the little known "Up The Creek," which comfortably sways in the rhythmic breeze; these songs capture Swingadelic capturing Toussaint better than the rest.

Night People; Southern Nights; What Do You Want The Girl To Do; Yes We Can Can; On Your Way Down; Java; Ruler Of My Heart; Get Out Of My Life, Woman; Sneaking Sally Through The Alley; Everything I Do Gonna Be Funky; Working In A Coalmine; Whipped Cream; Fairchild; Up The Creek; Mr. Toussaint.