By DAN BILAWSKY
December 7, 2015
Sign in to view read count 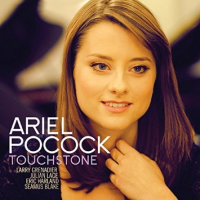 What are the touchstones of jazz? Harmonic acuity? Internalization of swing aesthetics and advanced rhythmic language(s)? The ability to quickly parse a composition in real time? An understanding of the historical framework of the music? The ability to create and speak one's own mind using any number of vocabulary sets? Yes. Each of those elements are touchstones in jazz, but they're meaningless when viewed separately. Jazz requires musicians to synthesize all of those skills and more while finding something meaningful to say in the process. Ariel Pocock does just that on this, her debut album.

It's hard to believe that this pianist-vocalist is a mere twenty-two years of age. She's clearly wise beyond her years, skilled in the art of musical communication, and firm in her artistic convictions. On Touchstone, she touches on a wide variety of influences—Randy Newman, Thelonious Monk, James Taylor, Keith Jarrett, Kate Bush—and sounds damn good doing it. Of course, it helps when you have a producer like Matt Pierson shaping the session and a band with the likes of bassist Larry Grenadier, guitarist Julian Lage, drummer Eric Harland, and tenor saxophonist Seamus Blake to work with. But Pocock doesn't get pushed around or pulled under by the weight of her collaborators. Instead, they seem to lift her up.

Touchstone opens with a wholly familiar tune—"Exactly Like You"—and Pocock uses it to express her inner daredevil: it's a high wire vocal act without a harmonic net. Pocock delivers this number as a voice-meets-drums affair with Harland, who backs her rhythmically and trades solos with her. It's impressive, not just for the way Pocock remains centered pitch-wise, but also for the way she fluently and flexibly phrases her scat solos against Harland's drumming. And that's just the beginning. "Devil May Care" follows, coalescing in intriguing fashion and swinging with spirit; Newman's "Real Emotional Girl" gives Pocock a chance to shine in a much different musical space; and "Barrel Roll"—the lone original from Pocock—focuses on the art of interplay. Keith Jarrett's peaceable "Country" and Taylor's folk-ish "You Can Close Your Eyes" close out the first half of the album. Both speak to roots music yet come from far different realms. It's a perfect back-to-back pairing that few would think to make.

Eclecticism remains key to this program as the second half of the album begins. Pocock artfully moves from a rounded take on Monk's "Ugly Beauty/Still We Dream" to a thoroughly modernized "All The Things You Are." Then she tugs on the heartstrings with "When I Fall In Love" before returning to singer-songwriter territory for the closing trio of songs—an affecting version of Tom Waits' "Rainbow Sleeves," a sleek and grooving play on Bush's "Mother Stands For Comfort," and a comforting rendition of the Dayna Kurtz-penned title track.

While jazz is certainly at play here, Touchstone isn't a pure jazz album and Pocock isn't a pure jazz player. She could be if she wanted to, but that doesn't appear to be what she's working toward. Instead, Pocock seems content to blur the lines by tapping into various stylistic veins, and since she's more than capable of doing a good job with everything that she covers, more power to her. For some, this could be a defining statement; for Ariel Pocock, it's merely a first step. There's no doubt that we'll be hearing more great things from this young talent in the future.

Exactly Like You; Devil May Care; Real Emotional Girl; Barrel Roll; Country; You Can Close Your Eyes; Ugly Beauty/Still We Dream; All The THings You Are; When I Fall In Love; Rainbow Sleeves; Mother Stands For Comfort; Touchstone.