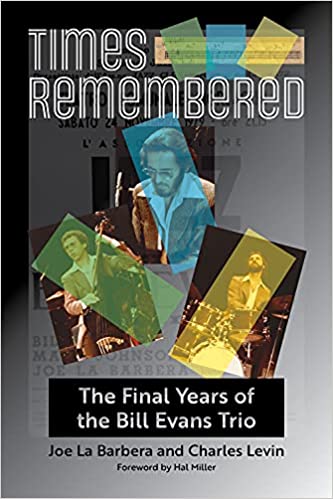 Reading about the life, career, and ultimate tragedy that was Bill Evans—as opposed to listening to his glorious playing—is neither an easy nor enjoyable task. So much has been written about his "decades-long suicide" by way of heroin addiction, intravenous cocaine use, and health abuse that the pianist-composer's life assumes an echoing of a Shakespearean tragedy—a musical "Macbeth," perhaps.

While that all may be so, the perspectives and insights we receive from this fascinating, fly-on-the-wall memoir are substantial and quite significant. In Times Remembered award-winning drummer Joe La Barbera and drummer/journalist Charles Levin take readers along on La Barbera's (and bassist Marc Johnson's) two years performing and recording with Bill. Those years were Evans' last, but, as the authors tell so well, they were permeated with canyon-deep emotion, dizzying musical heights, and ultimately, bitter sorrow. La Barbera's observations, perceptions, and interactions with Evans during that period—those both musical and mundane— are expressed with great clarity, insights, and an obvious love for the pianist.

Evans as leader had reimagined the classic piano trio, both in essence and actuality. No longer was it a pianist/leader with sidemen; the Evans trios and the last one portrayed here so informatively were a true collaboration, a trio in uno musical communication of the highest order. Evans insured, encouraged, and insisted upon that; he relished what he called "The Joy of Discovery," and mentored La Barbera and Johnson to devote themselves to embracing the highest performance levels possible. All three were successful in that effort. The authors bolster that fact by recounting Evan's performance and recording modus operandi e.g., minimal use of prepared charts and rehearsals and the pianist's willingness to share, receive, and return improvisational ideas. Extemporaneous magic would manifest itself as nuggets of creation circulated among the group like electrons around an atom.

The book is written in a clear, narrative style. There's no fluff or baroque embellishment. By way of a intro to his eventual joining Evan's trio, La Barbera shares his background as person and professional. His strong Sicilian family bond (La Barbera's parents were Sicilian immigrants with the three La Barbera brothers—Pat, John, and Joe—being born here), the La Barbera family band, Joe La Barbera's coming up the ranks playing locally in upstate New York, his Army Band hitch, stints with Woody Herman, assisting Buddy Rich, and four years with Chuck Mangione all prepped him for what was coming. However, there were experiences during his time in the trio for which nothing would prepare La Barbera or anyone; for example, being there when Evans learned that his beloved brother Harry had committed suicide, witnessing the devastating effect that had on Evans' ever-vulnerable psyche, dealing with Evans's constant drug abuse and lifestyle, and doing so while the trio performed worldwide. The ecstasy that emanated at times when things were musically rewarding was the payoff that assuaged the stresses of the group. Somewhat.

Unlike many leaders with sidemen (a term that itself reeks of the pejorative), Evans had an extremely close relationship with La Barbera, even allowing him to occasionally reside at his Ft. Lee, New Jersey pad (and cook for Evans!). As the authors show, the pair had a unique commonality, too. Both were Boy Scouts, Army Band veterans, and shared interest in sports and music. While Evans's own family was rather dysfunctional (his father was an alcoholic and abuser), La Barbera's strong familial DNA rendered him to respect and to a degree care for Evans (as did Evans's lover, Laurie Verchimon, who was 28 years younger than Evans and the author of her own Evans memoir) in such a way that was unique within a leader-sideman dynamic. La Barbera's touching anecdote and the accompanying hand-written note regarding a "birthday present" from Evans demonstrates their special friendship and mutual respect. The intensity of the book reaches a devastatingly sorrowful end as it brings us up to Evans' tragic and untimely death at age 51 on September 15, 1980. The description as told by La Barbera of those last frantic hours is riveting and heart-breaking.

The recollections presented here about the classic and not-so-classic performances put the reader in the seats of clubs, studios, and concert halls —and within the group musically. While it is not suggested in the book, readers will gain its tremendous value by bringing the recordings mentioned into play while working through this brief book. Rest assured that those that do that will gain immeasurably, as will readers who do that subsequent to reading. In a subtle way, the book is meant to be listened to.

Times Remembered offers readers exceptional insights into the world of Bill Evans and his fellow performers. It is not a biography. The addition of selected anecdotes and photos add an additional element. A bibliography, discography and itinerary of the last trio, as well as annotations and further reflections by La Barbera are provided. While there are fine bios out there, the truly definitive biography of Bill Evans is yet to be written. Until that occurs, this impactful book will certainly add to and enhance the current published repertoire.