Joseph Howell: Time Made to Swing

BY MARK SULLIVAN
February 19, 2016
Sign in to view read count 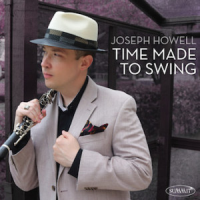 Ace clarinetist Dr. Joseph D. Howell dedicated this CD to the late Buddy DeFranco, king of bebop clarinet. In addition to being a role model as a player, his recordings with accordionist Tommy Gumina inspired Howell's collaboration with Cory Pesaturo, accordionist on this album. The accordion has found its way onto a number of jazz recordings recently, with pianist/organist Gary Versace a frequent doubler. Bassist Max Murray and drummer Ele Rubinstein complete the quartet. The program is a mix of bebop and standards, and it's a blowing session all the way. They could have titled it "time to swing."

"On The Sunny Side Of The Street" opens the set in a bright, extroverted mood that really could be described as "sunny." But the band sounds just as comfortable on Charlie Parker's "Confirmation" and an extended version of Thelonious Monk's "Let's Cool One." Howell cites saxophonist John Coltrane as a primary influence, and his clarinet sound does evoke a hard bop saxophone more than his clarinet predecessors (even dedicatee Buddy DeFranco).

The program continues in a similar vein, with jazz tunes like "Invitation" and Clifford Brown's "Sandu" alternating with standards like "I Can't Give You Anything But Love" (featuring an especially swinging accordion solo) and the infrequently played Disney soundtrack tune "The Bare Necessities." Things seem to come to an end with a lovely clarinet/bass duet on the standard "Alone Together," featuring a bass solo with clarinet accompaniment (you don't hear that every day). But then a hidden track shows up: Frank Foster's "Shiny Stockings," with Howell switching to tenor saxophone. A swinging way to end the album, although surprisingly his tenor sax sound evokes the Swing era rather than Coltrane.

On The Sunny Side of the Street; Confirmation; Let’s Cool One; I Can’t Give You Anything But Love; Invitation; The Bare Necessities; Howell's Blues/Sandu; The Midnight Sun; Milestones (old); Alone Together.