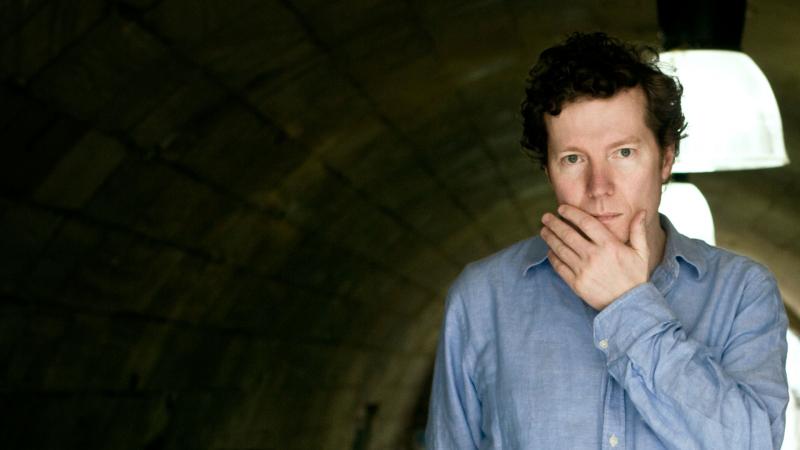 I don’t think it is all is over yet for physical formats or non- mainstream music. The future isn’t always what big companies want it to be. —Tim Bowness

As much as it's something most would prefer to avoid, when a pair of musicians share a lengthy musical history together it's difficult not to compare and contrast the work they do when apart. Beyond contributing added clarity to their individual work, it helps to articulate what each of them bring to the table when they're collaborating. Singer, multi-instrumentalist and songwriter Tim Bowness may have yet to achieve the same degree of commercial success that his partner in the currently on hiatus No-Man, Steven Wilson, may be enjoying these days; but since releasing his first "real" solo album in 2014, Abandoned Dancehall Dreams and its equally exceptional 2015 follow-up, Stupid Things That Mean the World (both on Inside Out Music), Bowness has managed to achieve a similarly upward trajectory with both increasing critical acclaim and sales at a time when most artists are experiencing a decline in commercial success, thanks to the tectonic shifts that have taken place in the music industry, especially over the past 10-15 years.

"In cold, hard numbers I'm probably at a little more than 25% of No-Man's sales base," Bowness explains, "and I'd say that 25% contains some new fans. A definite positive is that each of the three recent solo albums has done better than the previous one in a climate where albums are generally selling less.

"So, the good news is that there is growth and that the albums do better than anything else I do outside of No-Man," Bowness continues. "The press reactions have also been amongst the best I've ever had—including for No-Man's work. Additionally, it's been a period of learning and evolving, and feeling that everything is new again. At this stage in my career, that's a wonderful thing to experience."

The youthful-looking, fifty-something Bowness' third solo album, Lost in the Ghost Light (Inside Out, 2017), represents a shift for the singer/songwriter/multi-instrumentalist. Abandoned Dancehall Dreams and Stupid Things That Mean the World are both unmistakably influenced, amongst many sources, by progressive rock—a genre that's experienced a substantial resurgence in interest over the past two decades, thanks to an influx of new music from artists like Bowness and Wilson, as well as the reemergence of legacy artists like King Crimson, Steve Hackett and Van der Graaf Generator, who've all managed to balance audience demand for their classic repertoire with new music that's every bit as good and relevant as their best music from back in the day.

Lost in the Ghost Light is, however, not only an unapologetically progressive record; it's also a concept album...another genre touchstone. The album brings together some of the dreamy, nostalgic elements of No-Man—amongst Bowness' many signatures—with aspects of the more aggressive/progressive-leaning Henry Fool, Bowness' group with Ghost Light collaborator, keyboardist/multi-instrumentalist Stephen Bennett and a revolving door of additional musicians that has (unfortunately) released just two superb albums since 2001 (Henry Fool, reissued by Kscope in 2013 on the heels of the group's sophomore release, 2013's Men Singing). Bowness also brings elements of his collaborations with other artists including Centrozoon, Judy Dyble, Slow Electric, Opium Cartel and Darkroom; but this time the references to some of Bowness' favorite progressive music of the '70s is much more overt, more direct and more dominant, despite still being defined by his atmospheric approach to color in his music, and a softly understated way of delivering his sometimes direct, sometimes abstract but always poetic prose.

It expresses many of Bowness' concerns about music, the life of a musician and the challenges of a passion that has become, to some extent (and in Bowness' words) a prison sentence through the creation of a band (Moonshot) and singer (Jeff Harrison), told in the now but looking back at events of the past 50 years. As Bowness says in his brief liner notes (and in his characteristically poetic fashion): " Lost In The Ghost Light is an album about the state of a particular type of half-remembered musician in the present day, but it's also a love letter to a memory of a feeling that lingers."

Bowness has compared Lost in the Ghost Light to Steven Wilson's 2013 unexpectedly massively successful The Raven That Refused to Sing (and Other Stories (Kscope), about which Wilson said, in a 2015 All About Jazz interview: "I was as surprised as anyone that The Raven did as well as it did. That was a willfully uncommercial move. It had absolutely nothing on it that was even remotely acceptable to the mainstream, and yet it's become the most successful album of my whole career; it's the best-selling record I've ever done. It's extraordinary. And what that tells me is: the more self-indulgent and willful I am, the more likely the album is to appeal; it almost gives me license to keep doing my thing."

Lost in the Ghost Light's progressive references—and, in particular, its adoption of many genre qualities and characteristics, from more sophisticated compositions with episodic writing, irregular meters, more advanced harmonies and more, to overall coloration and signature sounds like that first (albeit tape-driven) orchestral/choral "sampler," the mellotron (albeit, in this case, a later model renamed the Novatron 400), and vintage analogue synthesizers—may, indeed, create a causal link to The Raven. That said, it also contributes—as have all their albums since Wilson took the first leap into solo territory with 2009's Insurgentes (Kscope) and Bowness followed in 2014—to articulating the commonalities and differences between these two longstanding musical collaborators and friends, and what each brings to their work together in No-Man. Neither Ghost Light nor The Raven would have been possible had it not been for classic progressive rock of the '60s/'70s—music from a time when it not only seemed that anything was possible, but also allowable—but they're also albums that simply could not have been made 40 years ago.

"To a degree, The Raven and Ghost Light are coming from a very similar place," says Bowness. "They're both strongly informed by the elements of 1970s progressive music that still speak to Steven and myself, and they're both trying to reconnect progressive music, with its emotional and spontaneous elements. I've often said that, contrary to its reputation as being distant, bloated and exhibitionist, for me the best progressive rock contains soaring imagination alongside rare emotional intensity.

"We both favored organic, period sounds and we've both contributed some trademark ballads," Bowness continues, "but I think The Raven was trying to bring back the exploratory jazz-infused nature of early prog—something that 2001's Henry Fool also did to a degree. Steven also wanted to reinvigorate the idea of meaningful virtuosity and signature playing. The likes of [keyboardist Adam] Holzman, [guitarist Guthrie] Govan, [drummer Marco] Minnemann and [woodwind multi- instrumentalist Theo] Travis are truly great modern day musicians and Steven provided them with a superb framework within which they could exhibit their skills.

"In that respect, The Raven reminds me of a latter day version of the trailblazing albums by Yes and Mahavishnu Orchestra," continues Bowness. "By comparison, Lost In The Ghost Light does stretch out musically and does contain some strong solos, but it's more reliant on atmosphere, rich chord shifts and wistful melodies. In that respect, I see Ghost Light as a contemporary take on those dense mid-to-late 1970s 'soft' prog albums such as [Camel's] Moonmadness (Decca, 1976), [Chris Squire's] Fish Out Of Water (Atlantic, 1975), [Strawbs'] Hero And Heroine (A&M, 1974), and Genesis' Wind & Wuthering (Charisma, 1977) and ...And Then There Were Three... (Charisma, 1978)—all of which I'm an unashamed fan.

Lost in the Ghost Light may refer to those softer progressive albums, but it still kicks hard when it needs to, in particular on the frenetic "Kill the Pain That's Killing You" and the second half of "You Wanted to Be Seen," that moves into a harder-edged, Genesis-informed 7/4 section with a gradual build to one of the album's most climactic peaks.

"I suppose," Bowness concludes, "that we were both trying to bring back elements of the progressive music legacy that we didn't hear elsewhere."

Amongst the aspects of the progressive music legacy to which Bowness refers is its exploratory nature, its aspiration to the new and its forward-thinking drive towards making music that stretches boundaries and breaks rules in a thoroughly contemporary fashion. There have been, with progressive rock's resurgence, a wealth of bands (including some legacy acts) paying tribute to the music of the '70s, but there's always the risk of sounding too retro, too derivative. While Bowness and Wilson know the history of progressive rock more than many, even when they are being more directly referential as they are, respectively, on Ghost Light and The Raven, they are both unmistakably modern records.

It's no surprise—more serendipity, in fact—that just a few years after he began life as a musician in the early 1980s, Bowness would meet Wilson and, together, form No-Man, a group which enjoyed critical and commercial success with a string of albums on labels including One Little Indian, Kscope and Epic. Originally a solo project for Wilson called No Man is an Island, once he met Bowness and the two shortened the group name to No-Man, not only did the group enjoy increasing success in the U.K., it also broke into the United States with its Billboard Top 40-charting 1993 single, "Taking It Like A Man."

As the group moved from purer pop to art-rock and, finally, the dreamy, progressive-leaning balladry of Returning Jesus (3rd Stone, 2001), Together We're Stranger (Snapper, 2003) and, in particular, the group's last studio effort, Schoolyard a Ghosts (Snapper, 2008), No-Man was met with increasing critical and popular acclaim...all the more remarkable given that the group took a 15-year hiatus from performing live, until its 2008 performance in London, England documented on the two-DVD set Mixtaped (Kscope, 2009).

But Bowness' tastes have always run even broader and deeper than the music he's made, and many of the musical touchstones that have crossed his path over the past half century can be found buried, at different depths, within his music, whether it be solo or in a collaborative group like No-Man or Henry Fool.

"I started making music in the early 1980s and by 1987 I'd met Steven Wilson and we formed a creative partnership that eventually became No-Man," Bowness explains. "No-Man were signed in the early 1990s to various companies (including One Little Indian in the UK and Epic/Sony in the US) and, luckily, we've both continued to make music ever since."

Bowness' formative years were a bit unusual for a child of the '80s. While most children are first exposed to the music listened to by their parents, there's a moment in time when they discover the music of their generation, whatever that might be, causing a paradigm shift in how and why they listen to music.