Home » Jazz Articles » The Blues: Why It Still Hurts So Good

The Blues: Why It Still Hurts So Good

By Doug Collette
February 20, 2017
Sign in to view read count 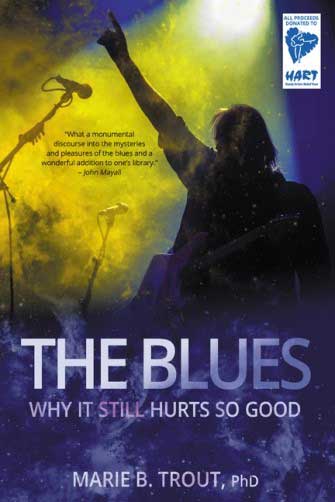 Although the therapeutic value of music has not been wholly certified in scientific terms, it is nevertheless an accepted premise in our culture, one that Marie Trout explores with as much passion as scholarship in her book The Blues: Why It Still Hurts So Good. By homing in on a specific genre as her focal point, she's able to credibly illuminate the various themes of that aforementioned premise in such a way her readers will believe as deeply in it as she does by the time they're done reading.

As a matter of fact, apart from the coy subtitle, the point of view(s) Trout espouses in her tome could be applicable to any type of music. Witness the quotes from interviewees on the feelings of camaraderie arising from concert attendance as well as the sensation of deep affinity that arises from hearing recorded blues music: it's the definition of community and kinship, arguably identical to fans of jazz, pop, show tunes, jamband or, arguably, any other genre. It's a facet of the conversation the author wisely references late in the book.

Marie Trout's stiffly academic tone in the early going of The Blues makes for a tough read and not just by the continuous use of the passive tense (even non-English majors may balk). The author is careful not to let a lack for formatting render her prose too dry, but there are points where it seems arbitrary and overdone, giving the impression she's trying too hard to convince. She deserves to have confidence in her perspective because The Blues is as much self-expression as a dissection of artistic expression. In fact, the book takes a wide turn for the better when Marie Trout describes her own state of mind as she dealt with spouse and blues musician Walter's serious illness and, almost simultaneously, begins her dissection of the contemporary phenomenon of blues fandom.

It's to her great credit she utilizes an academic approach in order to rise above the racism that seems to be intrinsic to any such discussion, vis a vis what's authentic blues and what's not. In so doing, she nurtures a healthy dialogue on the pros and cons of the premise at the heart of this book as well as the music itself, and by extension, the musicians who make it. And while she seems to embark a rather wide digression into the national psyches in taking account of wartime and post-war lifestyle of both the United States and Great Britain, her scientific explorations, reaffirmed with reference to more than a few meticulous studies, renders unassailable her philosophical argument(s) about the attraction of blues. In fact, what at first reads like non-sequitur, turns into a most artful setup for Trout's examination of the attraction of blues music to the predominantly white male demographic she references early on. Seminal British musician Chris Barber stands as a case in point.

The Blues constitutes Marie Trout's first extended writing project-she's written more extensively on-line-and while it's a fairly easy read, the book becomes a somewhat stop and go experience at times. For instance, her abrupt use of the vernacular versus her otherwise consistently formal tone makes her references to rock and roll sound forced. The prose gains fluidity, however, as she explores the contradictory nature of the white race's admiration for the blues and the fundamental sources of blacks' attraction to the style (or lack thereof), much of which intersects around mid-point of Why It Still Hurts So Good.

Basing her thesis upon interviews and surveys, plus research over the course of 2013 and 2014, all of which is fastidiously documented in the appendage of references, Trout is meticulous in stating and reaffirming both race's cultural perspectives and in doing so she may be making a profound point, intentionally or not; that is, the societal repression and sublimation of emotion of culture in the Fifties and early Sixties correlates psychically, if not physically, with the slavery blacks endured both before and after the Civil War (and even before based on more obscure studies).

And while there's a latent suggestion this point of view has more than a little to do with racist guilt, particularly in the blues purists' school of thought, there's no denying the original proliferation of white blues players as well as the incorporation of white blues now so deeply embedded in the contemporary musical universe. Far from just scratching the surface of the phenomenon that's her main topic, Marie Trout covers a lot of ground during the course of The Blues: Why It Still Hurts So Good. Given there's no specific acknowledgment of an outside editor's role, she deserves immense credit for the outline of the book because, when "Part IV" arrives in the form of dissection of the source(s) of transcendence of this music, absorbing the veracity of this section is akin to hearing the final guitar flourish of a stellar performance of a splendid song.

Trout might've utilized more specific artistic references in the course of the book to fix its contemporaneity in time. Her short discourse on British blues icon John Mayall adds color and similar interludes devoted to Stevie Ray Vaughan or the Allman Brothers Band would achieve the same end: liven up an otherwise often dry discourse. Likewise, more emphasis on the live performance aspect of the blues milieu, in contrast to the often extravagant stage production in pop, might've lent more distinction to her assessment of modern blues, especially as the comparatively straightforward approach of many artists is rooted (unfortunately) in their oftentimes (too) modest level of recognition.

But that may be quibbling because, by the time The Blues is done, much like the effect of the music at its best, live or on record, a reader is in a much different and better place then where he or she started.