By Hrayr Attarian
January 3, 2014
Sign in to view read count 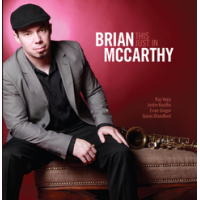 Jazz is not the first thing that comes to mind when thinking of Vermont but the state, despite its size, has had a long involvement with improvised music. Trumpeters Alan Shorter and Bill Dixon taught at Bennington College and guitarist Attila Zoller founded the Vermont Jazz Center in Brattleboro. In addition to having a small yet vibrant local scene, its largest city Burlington hosts an annual, impeccably organized, ten day festival that over the years has featured such giants as altoist Ornette Coleman and pianist McCoy Tyner. Out of this fertile environment emerges a fresh talent, saxophonist Brian McCarthy.

After graduating from William Paterson University, McCarthy cut his proverbial teeth in various local funk bands and jazz ensembles. On his second release This Just In he channels diverse influences that reflect both his past experiences as well as classic hard bop sensibilities. The title track sizzles with soulfulness as pianist Justin Kauflin's percussive chords lead the rhythm section in a slow simmering, earthy groove. McCarthy's own thrilling, blues-drenched saxophone soars out the band's darkly hued vamps but remains firmly rooted in its raw sound.

A versatile performer McCarthy exhibits an evocative tenderness in his lullaby like duet with Kauflin on "Loved Ones," a serene ballad that shimmers with silken lines. While elsewhere on "Precipice" he goes on an intriguingly modal bent. The most innovative composition of the album showcases McCarthy's hauntingly dramatic soprano phrases. Kauflin's passionately poetic keys underscore the overall mystical feel.

Kauflin brings a gospel-esque spirituality to pianist Duke Ellington's "The Feeling of Jazz," while bassist Evan Gregor imbues the arrangement's laid back swagger with an intense lyricism and a melodic sense.

Drummer Quinn Blandford masterful and multilayered percussion simultaneously drives the momentum and (with Gregor) anchors the music on such moody tunes as the elegant "The Departure (Part One)." Trumpeter Ray Vega (of Tito Puente fame) joins McCarthy on the frontline. Vega's burnished, clear tone embellishes the melody with clever spontaneity. His turn in the spotlight is, regrettably, relatively brief.

In fact most of the solos, although quite engaging and stimulating, do not stretch out far from the themes, both conceptually and temporally. This is rather surprising and a tad disappointing as the individual extemporizations are brimming with ideas and the group members are clearly deft at expressing them.

Although not a groundbreaking work of originality This Just In is a captivating and exciting record. Despite a few minor flaws it is delightfully sophisticated and a perfect introduction to the McCarthy and his cohort's superlative talents and musicianship.

Mac Attack; Precipice; The Departure, Pt. One; This Just In; Loved Ones; Bridgman Hill; The Feeling of Jazz; The Arrival, Pt. Two.

Title: This Just In | Year Released: 2013 | Record Label: Self Produced