Home » Jazz Articles » Roll With It: Brass Bands in the Streets of New Orleans

By Florence Wetzel
January 3, 2014
Sign in to view read count 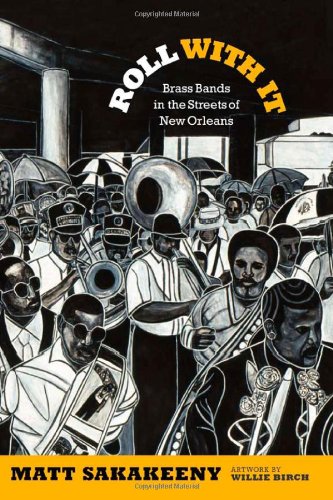 In his fascinating book Roll With It: Brass Bands in the Streets of New Orleans, ethnomusicologist and journalist Matt Sakakeeny delves deep into one of the great institutions of American music. In this searingly honest portrait of 21st-century brass bands, Sakakeeny shares the stories of musicians in three contemporary brass bands: Rebirth, Soul Rebels, and Hot 8. The musicians' personal stories are interwoven with historical information, academic reflection, and personal experience, combining to form a highly original work that creates a vivid portrait both of this musical format and the noble but beleaguered city of New Orleans.

The book starts with a description of a New Orleans second-line parade. (Note that jazz funerals include a march with a brass band, but parades with brass bands also take place throughout the year.) An annual tradition organized by one of the city's social clubs, the parade features the Hot 8 Brass Band, a group that has gained fame as international ambassadors for the city's strengths as well as its tragedies. One of Sakakeeny's gifts is his ability to bring these parades to life and offer the reader a full-bodied experience. He provides the necessary facts, explaining how the band forms the first line of the parade, with the second line composed of anyone who cares to join in behind and beside the band, dancing and singing and expressing themselves however they see fit. Sakakeeny then fills out the facts with color and sound: "Men appear first in double-breasted red suits, gold fedoras, and matching shoes made of alligator leather . . . Second liners jump in the air and smack street signs with open hands, and hip-hop blares from the open windows of cars parked along the parade route." If the reader hasn't yet experienced one of these brass-band parades in action, this book will make them want to purchase a one-way ticket to New Orleans posthaste.

But the parades and the communal joy they invoke are just part of the story. Although jazz is big business in New Orleans, this doesn't mean that the musicians and the art form are always given the respect they deserve. Without flinching, Sakakeeny explores New Orleans' potent intersection of music, tourism, racial issues, and urban planning. Not all the news is bad, but there's plenty of facts that are rather surprising: neighborhood ordinances that forbid music after eight p.m.; housing for musicians that they can't move into because they can't document their income; and tourist-industry bumper stickers such as: NEW ORLEANS: WE PUT THE "FUN" IN FUNERAL. Most shocking is the high death rate for young black men in New Orleans, which includes some of its finest young artists—for instance, over the years several members of the Hot 8 Brass Band have been murdered in the city. The horrors and heartbreaks of New Orleans' post-Katrina landscape certainly haven't helped: many of the musicians had to relocate after the storm, which has made it even more difficult for groups to stay together. (For anyone wanting to learn more about this modern tragedy, Spike Lee's documentary When the Levees Broke is essential viewing, as is the fictional series Treme, which is set in New Orleans and features the city's music and musicians throughout.)

Another compelling angle of this book is Sakakeeny's even-handed exploration of the way brass-band music continues to evolve. Like all art forms, there are those who stand firmly with the tradition, those who seek to revise it, and those who seek a balance between the two approaches. In the case of brass bands, many of the younger musicians want to include aspects of the music they grew up with, particularly hip-hop but also rock and reggae. Some older musicians see this as heresy, whereas others see it as a natural progression. Sakakeeny offers each side its point of view, leaving the impression that ultimately there's a place for everyone, as well as room for growth.

Mention must also be made of Willie Birch's artwork, which graces the pages of Roll With It. A nationally awarded artist with pieces in many museum collections, Birch's portraits of the musicians and second liners are as vivid and three-dimensional as Sakakeeny's writing. The book includes an afterword about Birch, where he offers the following insight: "The will to survive among the people of New Orleans is part of our improvisational nature, allowing us to create art forms that are unique to our environment."

A special book about a special institution, Roll With It is meticulously researched and chockfull of facts. It's also a deeply felt work: Sakakeeny is not afraid to wear his heart on his sleeve, and he freely expresses his love for the music, the musicians, and the city of New Orleans itself. And through the lens of the brass band, he invites the reader to view and ponder the many issues that inspire, impact, and oftentimes impede American artists. Best of all, he offers a verbal depiction of a great musical tradition that has stood the test of time, as well as a city that continues to shine despite undergoing unthinkable, ongoing adversity.