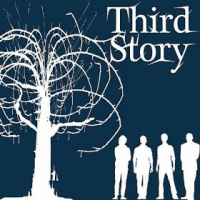 Third Story is a remarkable document from a young band (average age 26) of top flight musicians. Although the group was put together, and the album produced, by bassist Danny Weller, there is a collaborative spirit that infuses the disc, drawing material from three of the four players.

The roots of Third Story the band lie in the fertile Southern California jazz scene. Weller and guitarist Jeff Miles have moved to set up careers in Brooklyn, while drummer Jens Kuross remains in LA, and powerhouse pianist Joshua White is still in San Diego.

Kuross is fast becoming a first-call drummer, and is a member of the LA Jazz Collective. Weller comes from deep musical stock—his father, Bob Weller, is a triple threat pianist, composer and drummer, and his mother Ellen, is one of the best free-jazz multi-instrumentalists on the planet.

Miles' discreet electronics hover while White's "Illustrator," unfolds. The guitarist has a gorgeous, crystal clear tone, establishing the melody while White travels the divide between knotty voicings and overt lyricism. Kuross turns up the heat even as he floats the meter with intricate ride cymbal subdivisions.

Weller's "For Now" sounds like a merger between Bill Evans' "Nardis," and "Besame Mucho." The bassist turns in a loose-limbed, facile solo full of alacrity and muscle. Guitar and piano trade choruses, with White flexing some Chick Corea-esque chops and Miles demonstrating an astonishing, fluid legato.

Highlights abound on this disc, including Miles' rolling arpeggios on the Bill Frisell sounding "Molly," a pensive, "straight eighths" exploration that showcases the guitarist's ability to conjure memorable melodies, or the thematic development of White's "Scarlet Tanager," which features the percussive energy of Kuross written right into the form. The pianist dials up the intensity with waves of crashing block-chords over the undulating electronics of Miles and smash-mouth punctuations of the drums.

Weller's throbbing whole notes lead the way for the soulful piano guitar interplay on "There With You," an anthem-like rock ballad with a genuinely haunting melody. There is the fast modal swing of White's "King Kenny of Kirkland," which surges forward on the pinpoint cymbal articulations of Kuross into a joyous right-hand exposition by the pianist. Miles follows with a series of racing scales that echo the early work of Pat Metheny and Allan Holdsworth.

A four-note bass ostinato opens "Tree Of Thorns," which alternates between straight-eighths and a muscular free-bop swing which draws out some dazzling and daring commentary from White, who splays out dissonant clusters and nervous jangling before turning on a dime into sumptuous streams of unfettered melody.

In keeping with the ECM reference, Third Story was recorded in two days and boasts absolutely pristine sound. Weller, White, Miles and Kuross might not be "household names" now, but with an effort like Third Story under their belts, it won't be long.

Tracks: Illustrator; For Now; Molly; Scarlet Tanager; There, With You; Boss Fight; King Kenny of Kirkland; Croton Falls; Tree of Thorns; It's All Around You.