Home » Jazz Articles » The WHO Trio: The WHO Zoo

The WHO Trio: The WHO Zoo 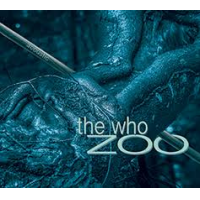 American drummer/percussionist Gerry Hemingway has made his home in Switzerland since 2009. Besides his teaching and solo performances, currently, his most accomplished working band is The WHO Trio. 'WHO' stands for Wintsch/Hemingway/Oester. It's Hemingway's unconventional piano trio with Swiss partners pianist Michel Wintsch and bassist Banz Oester.

The WHO Zoo is their fifth release, beginning with Choucas (Leo, 1999) through Less Is More (Clean Feed, 2010). Each disc has been a revelation and affirmation of this trio's like-mindedness.

These two discs are distinguished by one being an all acoustic, the other electric.

Both versions are bright and masterfully recorded. Hemingway's cymbals jump from the speakers, piano notes are crisp, and the bass lines anchor weight. That is, when Oester is wearing the cape of the timekeeper. Often he is creating melody or itching and scratching out new sounds. This trio is inclined to reinvention. Concocting new song forms and pioneering new ways to make sounds. Hemingway is a virtuoso at percussive invention, his "sounds" often inspire Wintsch to treat the piano as another percussive device, working the hammers as toms and keeping time with repetitive notes. That said, these improvisations are never doodling noise. The trio has a way of keeping their flights grounded in song. Melodies appear and are reworked, rhythmic changes have a purpose. Their instantly composed improvisations are indeed songs.

The acoustic/electric demarcation is not so much about opposition, as it is additions. Wintsch's piano is augmented by synthesizers, Hemingway adds a harmonica, and Bänz a lamp. Yes, a lamp. The difference here is that the electric pieces are all lengthy improvisations with noisier pieces of reanimation here. Does the electric disc signal a new direction for The WHO Trio, or maybe just another set of tools to mark their path?

About The WHO Trio