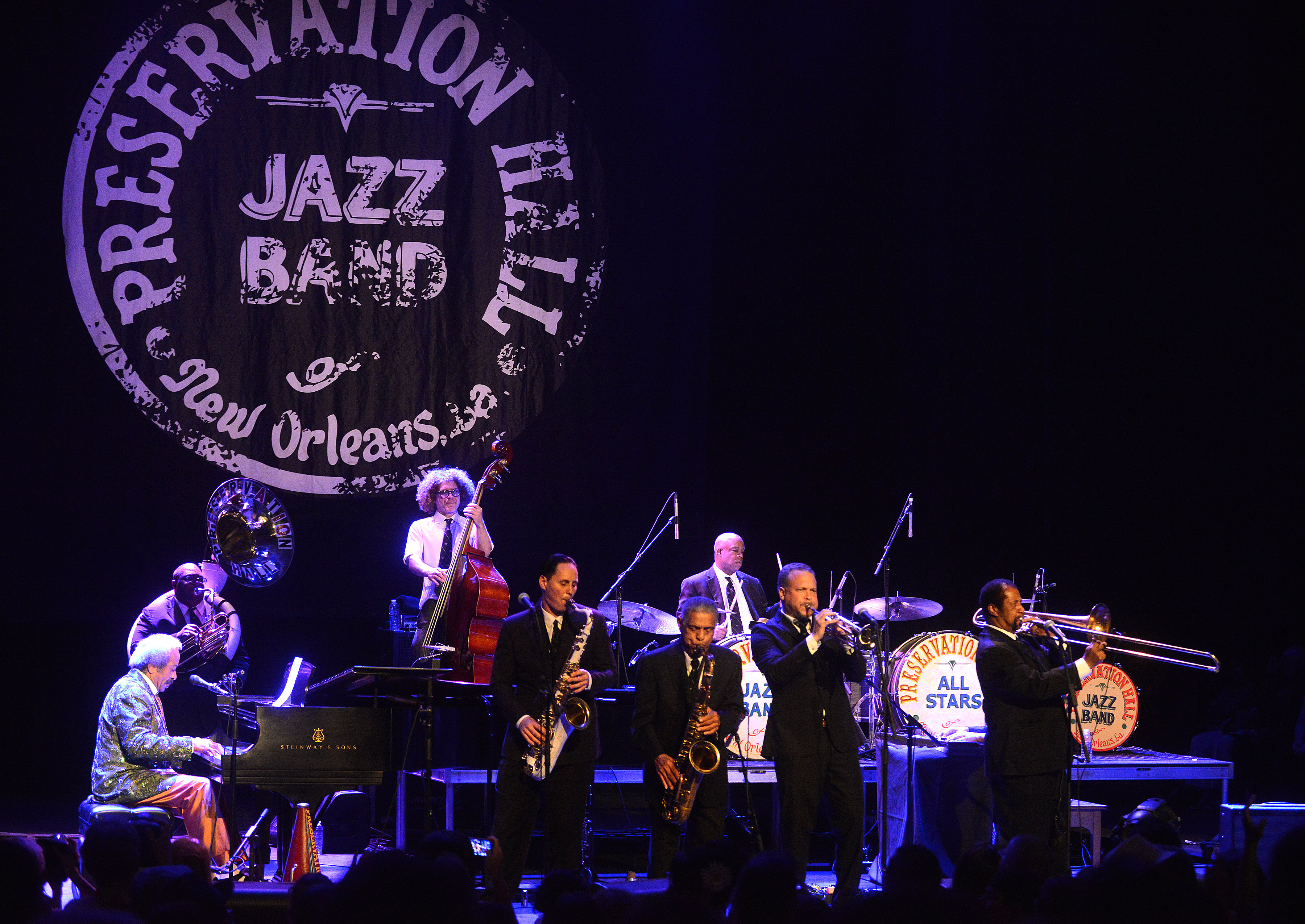 The Preservation Hall Jazz Band is on the roll again, and this time they have company. The venerable fifty year old band is on a thirty-eight city tour sharing the spotlight with the legendary Allen Toussaint who lights up the stage with his colorful suits and his even more colorful performance of some of his greatest hits. The 2,500 people in attendance had no idea what a magical night they were about to experience as these two great New Orleans institutions took over their hearts and ears for a ninety minute set.

The night opened with a lively version of "Going to the Mardi Gras" as the band paraded onto the stage. Trombonist Freddie Lonzo hit his signature seemingly impossible low notes as he growled his way through the number while piano professor Rickie Monie delivered beautiful chord voicings that were no doubt new to many ears in the giant auditorium. With his delightful smile, eighty-two year old clarinetist Charlie Gabriel once again charmed the audience with his original song "Come with Me to New Orleans." It's the type of tune that makes you wish you could book a trip to the Crescent City with Mr. Gabriel as your tour guide—you just know you would have a terrific time.

After a few more traditional New Orleans favorites, the band brought out Toussaint, along with his percussionist son Reginald. Toussaint entered the stage in a multi-colored suit that very few could get away with wearing, yet fits his confident, debonair personality to a T. Few realize Toussaint's impact on American music as a composer with many popular songs to his credit. The medley of tunes he played soon reminded the audience of his musical reach as he and the Preservation Hall band played his hits including "A Certain Girl," "Fortune Teller" and "Working in the Coal Mine." What was of particular interest was how easily the Preservation Hall Band moved from a traditional jazz band to a backup horn band to fill the room creating a wall of sound. Joe Lastie, Jr. vigorously and deftly played his drums in rock style in a step away from his usual traditional jazz drumming showing his mastery of the instrument.

After a few numbers, the band left the stage to Toussaint for a solo performance. He passionately played his hit "Yes We Can" made famous by The Pointer Sisters. The piano master also performed a mash-up of tunes from different genres from "Edelweiss" to the Beatles to "Chopsticks" to Professor Longhair to "Clair de Lune." Each song was only a few bars and changed so quickly from one to another that it would remind one of changing a radio station every eight seconds or so and immediately changing to the next tune. Aside from a few playful moments, it showcased Toussaint's prodigious musical talent as he was able to switch from genre to genre and song to song without missing a beat. It was a masterful moment.

In the end, the crowd coaxed the band out for an encore and they did not disappoint as they navigated through a frenzied version of "That's It!" With the perpetually moving—and audience favorite—Ronell Johnson's heavy tuba backing and assistance from Jaffe's bass, the band's energy could have only been fueled by a double helping of Red Beans and Rice as they paced the stage in this rousing tune. Braud's trumpet solo was magnificent and clear as the audience broke into a prolong cheer. The set closed with a full on horn-fueled version of Toussaint's "Southern Nights" to an appreciative standing ovation.