Blue Öyster Cult at The Space at Westbury 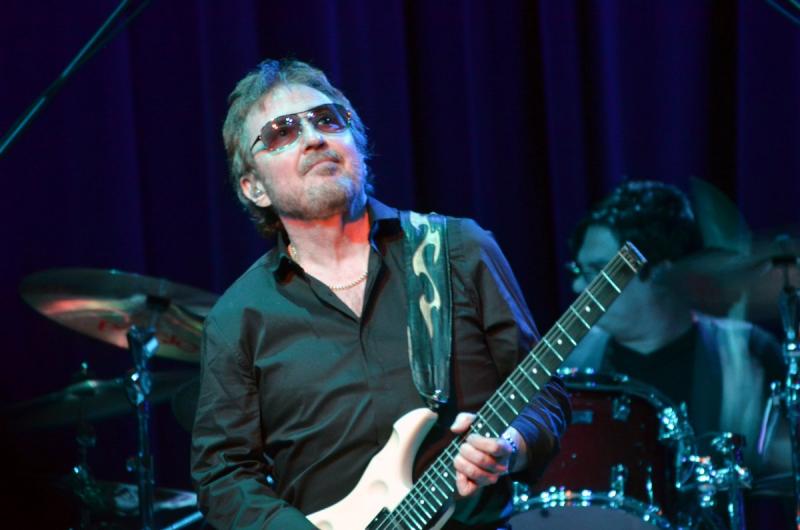 In its over 40 years of existence Blue Öyster Cult has sold multiple millions of albums worldwide. The group came from humble beginnings. It was formed in 1967 at Stony Brook University on Long Island. The band was originally called Soft White Underbelly and was comprised of guitarist Donald "Buck Dharma" Roeser, drummer Albert Bouchard, keyboardist Allen Lanier, singer Les Braunstein and bassist Andrew Winters. This group recorded an album for Elektra Records that was shelved upon the departure of Braunstein. Guitarist/vocalist Eric Bloom replaced Braunstein and the band underwent a number of name changes before finally settling on Blue Öyster Cult. Eventually Columbia Records signed the band and the group recorded its first album. Winters left the group and was replaced on bass by Bouchard's brother, Joe.

The band, best known for the songs "(Don't Fear) The Reaper," "Godzilla" and "Burnin' for You" continues to tour and record. Its current lineup includes Roeser and Bloom, as well as bassist Kasim Sulton, drummer Jules Radino and Richie Castellano on keyboards, rhythm guitar, and vocals.

On a warm Saturday evening in late October, Long Island's newest concert venue The Space at Westbury, played home to Blue Öyster Cult or BÖC as many have come to call them. The venue was filled with a mostly middle-aged crowd who had come in anticipation of a rocking high-energy performance featuring the mélange of hard rock, and pop infused with a touch of metal (that the band is not only known for, but has influenced a generation of other bands).

The night began with the stage bathed in blue light with the "Game of Thrones" theme blaring from the loudspeakers. As the opening theme tapered out, the band appeared on stage, with Bloom announcing, "All right, Long Island, are you ready?" The crowd responded with a loud cheer, and the band opened with a driving rendition of "This Ain't The Summer Of Love" from the Agents of Fortune (Columbia Records, 1976). The evening featured songs from every era of the group's career, from "Then Came the Last Days of May" from the band's self-titled debut album (Columbia, 1972) to "Career of Evil" from Secret Treaties (Columbia, 1974) to "The Golden Age of Leather" from 1977's Columbia release Spectres to "Burnin' for You" from Fire Of Unknown Origin (Columbia, 1981) to "Harvest Moon" from Heaven Forbid (CMC International, 1998). Other songs that made their way into the set were "Me262" (with its boogie woogie keyboards). "The Vigil" from Mirrors (Columbia, 1979) and "Buck's Boogie" from On Your Feet Or On Your Knees (Columbia, 1975).

As the main set was drawing to a close, Dharma introduced "Godzilla" by stating, "I think I see something big headed this way now..." The audience which was seasoned with numberous longtime fans (as evidenced by the large number of them sporting vintage BÖC t-shirts knew exactly what was about to transpire and reacted by screaming gleefully. What came next was something that you don't get to see every day. Sulton was introduced and the band treated the audience to a musical version of his resume. Following a snippet of Joan Jett's "I Love Rock 'n' Roll Bloom stated that they played it because "Kasim played with Joan Jett." The band played a short snippet of "Bang on The Drum all Day" becasue as Bloom said, "Kasim played with Todd (Rundgren)." They then played an even longer portion of Meatloaf's "Paradise By The Dashboard Light" punctuated by Bloom stating, "Because Kasim played with him too!" The other members of group then backed off and gave the bassman the spotlight for a well-deserved solo. Radino soon joined in and the bass solo became a funky rhythmic interlude followed by a drum solo. Soon the entire band returned to the stage and eventually worked its way back and returned to the main theme of "Godzilla." After the song ended and the applause died down, Dharma began an elongated guitar intro that eventually evolved into the opening riffs of "(Don't Fear) The Reaper." The audience leapt to its feet and danced in the aisles as the band played its signature song. When it came to an end, Bloom, Dharma, Sulton, Radino and Castellano came to the front of the stage and took their bows and exited the stage but quickly returned.

The set of encores began with "Harvester Of Eyes." "I Love The Night" and "Hot Rails to Hell" followed. Bloom then asked the crowd it they wanted more. He said, "Howe 'bout one more, we'll play all night long." When the cheers, screams and whistles from the audience reached the highest levels the band launched into "Cities on Flame With Rock 'n' Roll."

As the main band members (Bloom and Dharma) approach 70 years of age, BÖC continues to play strong, passionate, energetic, muscular rock. With many members of its audience also approaching a similar age, the band's music is a testament of the healing properties of rock 'n' roll. Age is just a number and on this night the band members and the audience members turned back time playing and partying with an energy and fervor that younger groups and fans only wish they could muster.