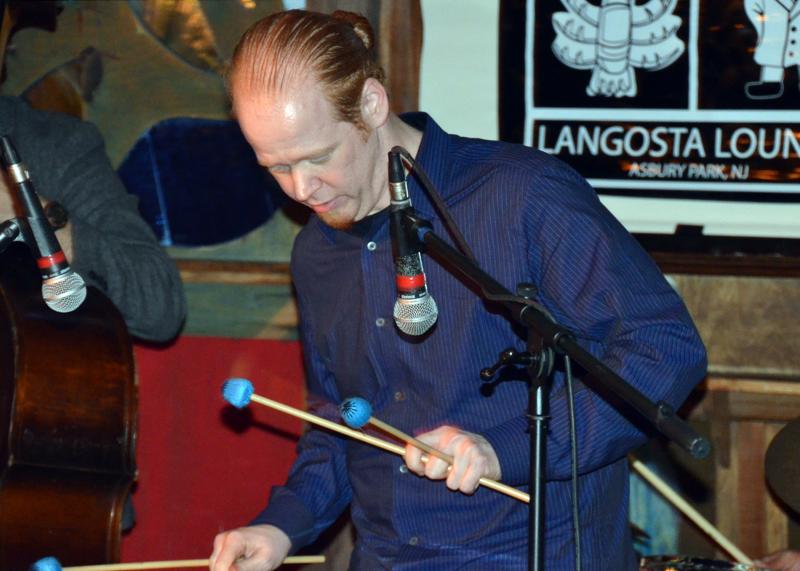 By GLORIA KROLAK
March 3, 2015
Sign in to view read count
Another epic gathering of vibraphone players was uncorked and, like Champagne on New Year's Eve, this bubbly was not staying in the bottle. Part of the Third World Vibes Congress, the jam exploded at the packed Langosta Lounge and Restaurant on Asbury Park's boardwalk early in January. Pairs of vibes players, many of whom had never played together or even met, formed quartets with stalwarts, bassist Loren Cohen and drummer Alvester Garnett.

They rolled in like waves. First Joe Locke and Tony Miceli played "Invitation" and "Darn That Dream," then legends Stefon Harris and David Friedman with "Bye Bye Blackbird," "Recordame" and a blues. Stefon rematched with Ted Piltzecker for "What Is This Thing Called Love," followed by Behn Gillece and transplanted West Coaster Anthony Smith ringing out on "Bags' Groove." Texans Dana Sudborough and Ed Smith chose "Caravan." A trio of students took over for a tune before Bill Ware and Stefan Bauer teamed up for "Billy's Bounce." "Green Dolphin Street," with Jerry Weir and Dave Ellson followed, then Steve Shapiro with Bob Beckham and Bill Ware with Dana Sudborough performing "Body and Soul." Just when you thought the tide was going out, Miceli and Ware rode in on one final perfect wave. The unavoidable end to a perfect beach day.

The jam was part of the fun, but the Congress also had important work to do. In the '40s everyone knew what a vibraphone was. Even with all the high-powered and talented vibists performing and composing today, fewer music fans have heard the vibes, or even know what it is. And that's where the World Vibes Congress comes in, to promote and advance this most versatile and hip instrument. Philly-based vibraphonist and creator of vibesworkshop.com Tony Miceli and Malletech owner, manufacturer and classical marimbist Leigh Howard Stevens gave birth to an organization that has quickly become very special to players, educators and students whose passion is the vibraphone. At Sunday's session of the annual meeting, attendees adopted the Neptune NJ Malletech facility as its home base. Many signed up to do the leg work and share the expenses of keeping it there in 2016. The administrative task of nominating an advisory board to organize and further the agenda, visibility for the vibes, was also achieved.

Earlier there'd been workshops galore. Stefon Harris introduced his new ear training app, Harmony Cloud, to be released this spring. He and his technical partner have worked hard to include every combination of chords into the program to teach musicians to recognize what they hear and thus help them better express themselves. The idea was well received. Joe Locke played favorite tracks from some less well-known vibes players in a unique listening session, Severi Pyysalo, Jim Hart and Teddy Charles among them.

Like last year, Stevens gave a tour of the factory; Steve Weiss Music, percussion specialists based in Willow Grove, PA, sponsored lunch; and Mario DeCiutiis demonstrated his MalletKAT, a virtual orchestra in a vibraphone, and the skill he possesses to play it.

Ed Smith displayed the fluidity of his original compositions played on another Malletech innovation in a session called "Eat, Pray, LoveVibe." The LoveVibe allows musicians greater control over the rate and depth of the vibrato in real time, with a frame that is lighter but more stable and easier to set up. David Friedman, here from Berlin, described the ways in which this "hunk of metal" has a built-in capability for profound expression, aside from the human behind it.

Bill Ware shared some of his personal history, answering the unasked—why he sits down to play, the only vibes player to do so. An ankle injury and removal of a spinal tumor diminished nerve function in his legs, but also gave him the advantage of using both feet on the sustain pedal. In his discussion he compared the vibraphone to the guitar which, once electrified, enjoyed immense popularity, and still does. He thinks the same could happen with the vibes, and that electrification will increase the musician's vocabulary. Steve Shapiro's description of the difficulty of micing an acoustic instrument without distortion and its possible solutions, and Ware's talk on electric effects reveal how much technical savvy musicians require.

The 2015 venue, the Langosta Lounge, was a good choice for both dinner and sight lines, and several area hotels offered reduced rates for Vibes Congress members. Look for more information for the 2016 event at the World Vibes Congress website. Jazz fans can get involved by attending the Saturday night jam. To hear all these extraordinary players on one stage, to feel the camaraderie among them, is an incredible experience. Don't miss it.