By David Miller
November 11, 2009
Sign in to view read count 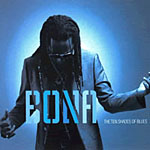 Widely known in jazz circles for his virtuosity on the bass, relatively little attention has been paid to Richard Bona's solo career. Pity, as his solo records are generally excellent. Bona's records have a style that can only be referred to as world music. Generally, that term is misused, but Bona truly takes his influences from all over the world. Sure, he's Cameroonian, and his heritage plays a large role. But one can also hear overt references to jazz, bluegrass, blues, European pop and much, much more in Bona's music. This adds a sense of unpredictability to his work—it's impossible to know what to expect and so just about anything is possible.

Bona's The Ten Shades of Blues continues in the same vein. There are references to India, Africa, and good ol' down home Americana, all interpreted with Bona's natural flair and effervescent smile. As on most of his other solo work, the multitalented Bona is everywhere and plays almost everything. The album opens with "Take One," a choral masterpiece—except all of the voices are Bona's. "Shiva Mantra" follows, and here Bona is credited with lead and background vocals, bass, keyboards, guitars and percussion. Somehow, on this track, Bona manages to be at the forefront of the background, keeping the music grounded in jazz and African traditions while being overtly Indian. It's Indian religious music—with a kickin' bass line.

Bona is certainly a talent deserving wider recognition. His considerable musicianship speaks for itself, and his passion for music is evident in all of his work, whether as a sideman or a leader. The Ten Shades of Blues continues his excellent solo work, joining the likes of Scenes from My Life and Tiki as essential.

David is a longtime music lover whose tastes continue to expand as great music is put out each and every day.